Changes in an Overland Park ordinance that would require neighborhood meetings and wider notification on certain development projects could help the city avoid future confrontations with irate property owners, proponents said during a public hearing Monday.

Shortly afterward the city planning commission unanimously approved additions to its unified development ordinance designed to give neighbors more of a voice in big projects that increase the density of an area.

If the changes are approved by the full city council, developers will have to hold neighborhood meetings when they ask for rezoning from away from low-density residential, when the projects are for over ten acres of multi-family, office, commercial or industrial, when significant changes have been made to the development plans or when a special use permit is requested for new construction.

The area of notification will also be wider than the previous 200 feet from the project, which is set by the state. The new rules call for a 500-foot notification area. The illustration below shows how the change would affect the notification area for the Metcalf Crossing project, as an example: 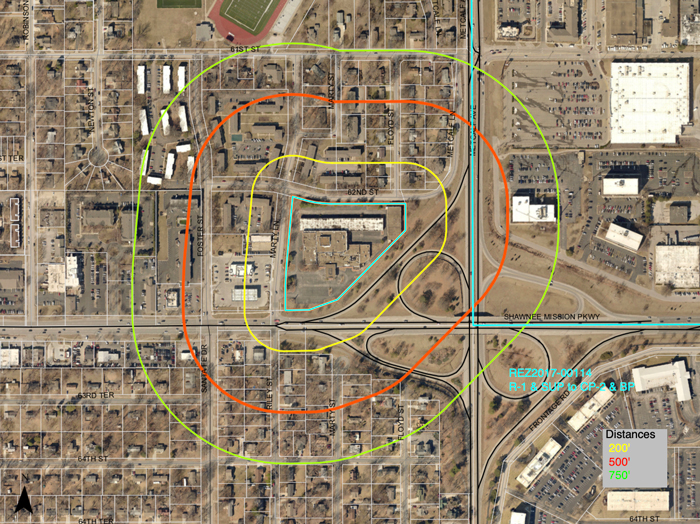 In addition, the city will change signs at the building sites to be brighter and written in simplified language. The city would also put more information on its website for people who want to find out about the projects.

“We felt strongly that the more residents involved, the better,” said Mary Coffman, a member of the steering committee that worked for a year to draw up the changes. “It will reduce the number of irate and angry residents at planning commission and city council meetings if they had the opportunity to speak at a neighborhood meeting beforehand,” she said.

Communication between the city, the developer and residents has been a perennial topic of discussion at city meetings when big developments are proposed. Some of the largest developments, like Brookridge and BluHawk, have drawn crowds of angry residents who’ve complained that they didn’t get a notice or that the notification was too rushed.

It was a 500-unit apartment project near 127th Street and Metcalf Avenue about a year ago that made city leaders reconsider whether their notification rules needed an update. Residents at that meeting said their neighborhood would be affected by the project, even though most of them lived beyond 200 feet.

The new rules lay out some specifics on the neighborhood meetings. Developers have always been encouraged to present their projects to neighbors ahead of city approval, but they have not always been required to have them. Aside from the size of the notification area, many particulars have been left up to the developers in the past. The ordinance change would require a 10-day notice and that the meetings would be held no fewer than 10 days before they are scheduled on a planning or council agenda.

Holly Grummert, a Ward 1 candidate for city council, said the change would help neighbors. “It should be a welcoming opportunity for citizens to engage with the developer in planning of their city,” she said.

Stephan Glentzer, a candidate in Ward 3 said he’d like to see the notification area even bigger, at perhaps 700 feet.

Planning commission member David Hill said the new rules should be workable for both developers and residents. If not, the details can be adjusted later.

“What it comes down to is finding the right balance,” between developers and the public who needs the information, he said.

The new rules would go into effect in January if approved.