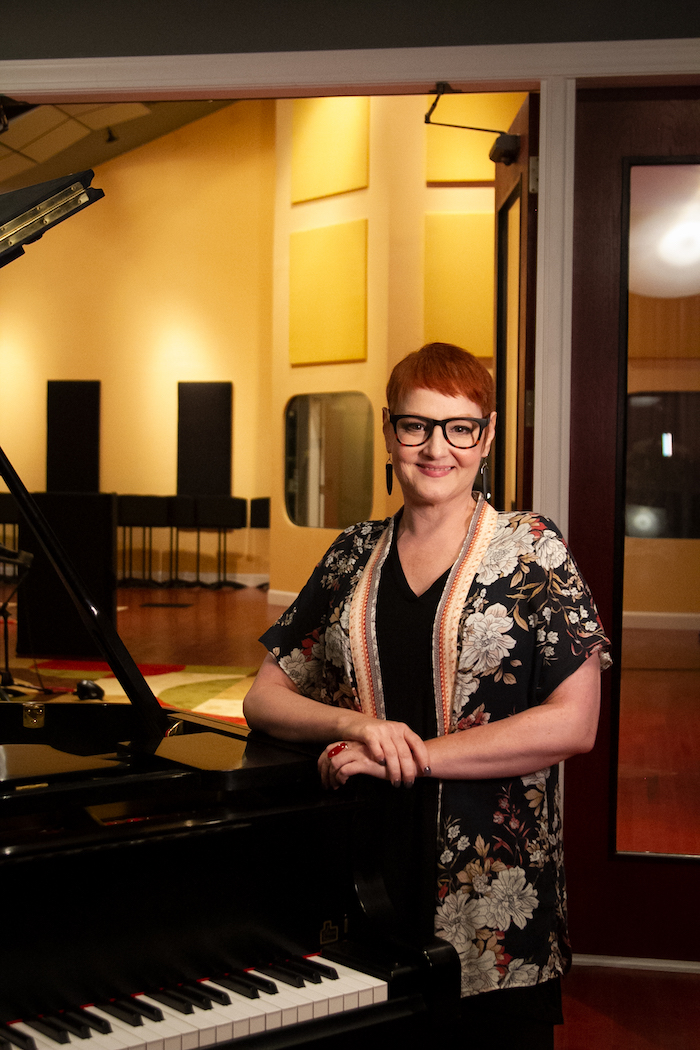 Even throughout her time fighting breast cancer, Molly Hammer hasn’t stopped singing. Even after the cancer took her voice for a short time. The jazz singer keeps a positive attitude, even though some days are harder than others. A professional actress for about 15 years, Hammer transitioned into jazz singing around 2005. Three years later, she was diagnosed with stage 3 breast cancer. A year later, she got her first jazz gig. After a double mastectomy, reconstructive surgery and lots of chemo radiation and hormone therapy, she gained remission for eight years. The cancer is back now (in the lung and bones), but so is she — in fact, she’s recording her third record this fall with a producer in Parkville, and working remotely with famous jazz artist Jane Monheit. Hammer sings at local venues such as the Green Lady Lounge, the Blue Room and Chaz on the Plaza. She lives in Mission with her husband, Jeremy Cruse, and their two cats.

I think it’s important to mention that this year my cancer spread further. We found cancer in my liver and then it spread to my brain. And so I’ve had radiation on my brain like three weeks ago. It’s so weird to even think about.

I woke up in June this year with no voice at all. I went and saw an ENT two days later and he said I had a paralyzed vocal cord. As somebody who’s a professional vocalist, that’s one of the worst things you can hear. And it doesn’t usually get better.

He said I would not sing again for a very long time and it was absolutely devastating. So I was kind of in the midst of trying to figure out how to move forward with no voice.

I was cautiously optimistic. I felt elated every time I had more of a voice but not wanting to assume that I would get full singing voice back.

So I made an appointment with an ENT at KU. She specializes in vocalists. It took me a while to get in with her. My vocal cords were working good, but she was trying to find a scientific explanation for it. And there isn’t one. It’s weird. But in the process we had to do a head and neck CT, which is how we found the spots on my brain while they were still so very tiny and were able to radiate them all separately. That’s a good thing.

The big thing that happened is in 2016, the cancer came back. Once it returns, it likes to return in certain places. And at that time it had returned in the lung and bones.

So that started my journey as a metastatic breast cancer survivor. At that time, my whole focus really shifted into living as bold of a life as I possibly could. I hadn’t been out of the country. I had hardly traveled. So starting in 2016 I have now, gosh, I traveled to Paris, Florence, Rome, I’ve been to New York, LA, Seattle, San Francisco. God, there’s probably more. I’ve just been trying to see as much as I possibly can.

So that’s a huge, huge part of learning that my cancer had spread, you know, and that it was now incurable. Metastatic breast cancer is not curable.

I’ve traveled and I will continue to travel as long as I’m alive. Huge passion of mine that I didn’t really get into until I felt compelled to not wait. I guess that’s a good way to say it. Not knowing how much time you have on the planet — which none of us do — but having it sort of in your face like that changes the way you look at life.

I’ve really gone for it in my career as well. Being just conscious to work hard and move forward, learn new things, take drum lessons, just be the best I can be at what I do. So that’s been huge for me. I’d find so much joy in performing, so much joy in my family and friends, so much joy in traveling. Those are kind of the three things that really just keep me happy.

I look at life as a gift, as an absolute gift and that even on the days I don’t feel well, I’m still going to be happy and even whatever I go through, I will still focus on the positive.

You can’t be positive 100% of the time. That’s just not reality. It’s just not human nature either. But I will never live in that negative place and I won’t live in fear. I think that’s my main mindset anymore.