The experience Jacob Moyer says he had in Overland Park Monday was overtly hostile, but not necessarily uncommon, according to LGBTQ residents who have spoken out in favor of a non-discrimination ordinance.

Moyer, of Lenexa, said he was in a public restroom during a shopping trip when he was approached by a man working there. The man eyed his rainbow tee shirt and gruffly told Moyer to “get out of here.”

So the passage of an ordinance that bans discrimination based on sexual orientation or gender identity later the same day was especially sweet.

“I just want to express how overjoyed I am that five hours later, it’s literally illegal to do that. That’s really exciting for me,” Moyer said after the vote Monday that made Overland Park the 11th city in Johnson County to codify legal protections from discrimination based on gender identity and sexual orientation.

Overland Park was late to join the spate of similar ordinances approved in smaller Johnson County cities. Mayor Carl Gerlach said the city wanted to take the time to do it right, hence the city’s deliberate pace working on a measure for the better part of a year. But the final discussion lasted only 16 minutes before the council approved it 10-1. Councilmember Jim Kite voted against it. Councilmember Gina Burke was absent.

The ordinance bars such discrimination in housing, employment or public accommodation, although religious organizations are exempt. But even council members voting for it pointed out that it is far from a perfect solution to discrimination complaints.

For example, the most the city can do is levy a $1,000 fine if there’s a violation. Councilmember Dave White likened that to the penalty for making an illegal left turn. Anyone seeking bigger damages through lawsuits would go through state or federal courts, where different rules apply. And an exemption for religious organizations leaves a wide loophole for discrimination to continue, he said.

Councilmember Richard Collins said the damage caused by discrimination in housing or employment is significant.

Discussion during that committee meeting often centered around technical issues and the nuts and bolts of enforcement. Kite expressed concerns about a part of the ordinance that makes it a duty not to discriminate. That section, meant to be a bit stricter than other cities’ NDOs, creates a pathway for lawsuits that could expose businesses to more risk, he noted.

White mentioned NDOs in Arizona and Kentucky that have been the subject of lengthy lawsuits. The city could end up with legal expenses to defend its ordinance, he said.

“We’re probably the biggest target. If somebody wants to test the law, they’re probably going to test it here,” he said, adding that he didn’t believe the risk of such a suit was a good reason to not pass it.

Some also had qualms because the U.S. Supreme Court is hearing arguments on the issue this term, and they were unsure how the ordinance could be affected.

Still, the majority approved the ordinance saying it was the right thing to do, in absence of action at the state or federal level. The ordinance could be adjusted later to conform to future court rulings.

“I want to remind everyone why we’re here, why we’re taking action,” said Councilmember Logan Heley. “It’s because of the people who are in our community but don’t feel fully welcome, don’t feel like they have the same rights and protections that other people, including myself and other people at this table and the audience, have.”

“To our LGBTQ friends who live, work, worship, attend schools, patronize our businesses: You deserve love, you deserve to live your life, you deserve respect and you’re welcome in the city of Overland Park.”

Other council members largely agreed during the discussion in the full chamber.

Councilmember Chris Newlin said he was missing his son’s choir solo for the vote. But his teenage son had told him the vote would mean a lot to his classmates struggling with gender issues.

Councilmember Faris Farassati, a physician, said the action makes sense from a public health perspective because “discrimination is a very good ground for destroying your mental health.”

But the state and federal governments are more appropriate arenas to have the discussion, most agreed. A few councilmembers noted that several state lawmakers were in the chamber and urged them to take the matter up. Attending were Reps. Brandon Woodard, Brett Parker, Stephanie Clayton, Susan Ruiz, Jerry Stogsdill and Sen. John Skubal.

Heley took a moment to give Senate Majority Leader Jim Denning’s email address, before Gerlach warned him not to become too political.

Afterward, Woodard said he is confident there are enough votes to pass House Bill 2130 barring discrimination on sexual orientation or gender identity. The measure has been blocked by leadership from coming to a vote, he said. 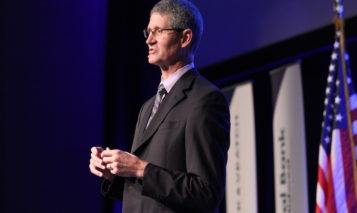