Four of the eight seats on the Merriam city council are up for election in November. And all four of them have drawn contested elections. Here’s a look at the candidates.

Incumbent Jason Silvers is facing a challenge from John Canterbury, a former councilman who served a few years ago. Silvers was selected by the council in April to fill the seat left vacant by Robert Weems, who stepped down after he moved out of the city.

A Merriam resident since 2007, Canterbury is seeking another term on the council after he ran unopposed and served from 2011 to 2015. He first ran for the Ward 1 seat in 2009 but lost.

In his campaign, Canterbury has raised concerns with the city process for selecting public artwork as well as design plans for the new community center. He feels the city leaders ignored residents’ requests to stall the process and make the outdoor aquatics in the new facility bigger.

“I paid attention to some of the things going on within the city and city government, and I felt at the time that I left that I was leaving it in good hands, and then I have not been in total agreement with some of the things that have occurred in the last few years,” he said.

Canterbury serves as the director of event technologies and audio/video services at Hilton Kansas City Airport hotel. He also owns his own DJ company, Canterbury DJ. He lives with his wife, Julie Canterbury.

A resident of Merriam since 2012, Silvers is seeking his first elected position in local government. If elected, he would remain in the seat on the council to which he was selected by the council in April.

If elected, Silvers hopes to focus on keeping Merriam’s current progress and getting more acquainted at the city level, but he also wants to make sure housing is affordable for all residents. He also he hopes to keep Merriam diverse and accessible to everyone.

“After coming to the city of Merriam, I’ve tried to become very vested in it,” Silvers said before the council appointed him. “This seems like a very realistic way for me to help guide the city of Merriam and do my part in helping the city run.”

Silvers works mainly in advertising and does marketing for a nonprofit in Leawood and volunteers for Great Plains SPCA in Merriam. He lives with his wife, Jennifer Silvers.

Former councilman Dan Leap and resident Whitney Yadrich are vying for the Ward 2 seat. The seat is filled by Al Frisby, who decided not to run for another term.

A resident of Merriam for the past 20 years, Leap lives above his GuitarLamp business downtown. He also owns and operates Total Comfort Heating & Cooling. A former councilman who served from 2003 to 2011, Leap said his skills as a businessman in maintaining a budget and planning for the future are the same skills needed to run a city.

“As a long time Merriam resident and business owner, I have a vested interest in seeing that our city prospers,” he said, adding that he believes residents’ tax dollars have been wasted. “I respect the wishes of my fellow residents, I believe in spending wisely, and I take the public’s trust very seriously.”

A resident of Merriam for about two years, Yadrich is seeking her first elected office because she had concerns with the way the city communicated with residents about the new community center.

“People were consistently feeling like they weren’t being heard,” Yadrich said. “That signals some kind of broken communication structure, and it didn’t feel productive. It didn’t feel like we’re moving forward in a way that was going to rebuild trust.”

If elected, she hopes to work on improving the city’s communication channels with residents and also foster a collaborate team effort that brings residents together. She also wants to focus on the city’s spending, especially with tax incentives, and “bring sustainability back into the conversation.” For instance, she supports the city’s sales tax renewal, which will help fund stormwater projects.

Yadrich has a background in journalism and currently works in project management at Intouch Solutions. She lives with her husband, Jake Yadrich.

Merriam residents Amy Carey and Bruce Kaldahl are vying for the Ward 3 seat. Councilwoman Nancy Hupp, who currently fills the seat, is not running again.

A resident of Merriam for the past two years but a longtime resident of Johnson County, Carey is seeking her first elected office. She raised concerns with the city’s response to three petitions that circulated about the community center last year.

“I’m going to focus on term limits; there’s no reason that anybody should be on the city council for over a certain amount of years,” she said. “That’s stagnant waters to me.”

If elected, Carey hopes to push for the city to listen more to residents. She also plans to “veer away” from expensive public art projects.

Carey has a 15-year background in the medical field and currently works at a local level two city hospital. She has served on several boards in the medical community, including the advisory board for the Allied School of Health, and considers herself “a huge advocate” for people with mental health issues.

A resident of Merriam since 2011, Kaldahl is seeking his first elected office. He said Councilwoman Hupp had convinced him to run for the seat. If elected, he hopes to represent the residents. But he noted he does not have a specific agenda he would like to see accomplished.

“It’s a very livable city; we love living here, and we want to make sure the citizens are represented on the council,” he said. “I think that would be my job is to take each issue one at a time and make the decisions based on what’s best for the citizens of Merriam.”

Kaldahl has been working for Hallmark for almost four decades. He previously served on the board of his homeowners association. He lives with his wife, Susan Kaldahl.

A Merriam resident for about six years, Chivetta also serves on the Merriam Public Art Committee. In her first run for elected office, she hopes to bring more diversity to the Merriam council in terms of age and gender.

If elected, Chivetta hopes to start making Merriam more of a destination, especially in the downtown area. She wants to focus on walkability and build on the farmers market area as well.

A licensed interior designer for about 10 years, Chivetta works for Scott Rice Office Works, a commercial furniture company in Lenexa. She lives in Ward 4 with her husband, Dan Chivetta, and their 2-year-old daughter.

A Merriam resident since 1965 (except for a few years when he lived in Overland Park, just shy of the Merriam city limit), Pape was first elected to the council in April 2015. Prior to that, he served 38 years in the fire service for the city of Merriam.

“I love this city; I’m 62 years old, I’m just not ready to quit,” he said. “I want to continue to see Merriam thrive and get better. It’s changed so much over 42 years, and every year I see it getting better, so I want to be a part of that.”

He hopes to continue infrastructure improvements, including curbs, streets and sidewalks, and build on the city’s drive-ability and walkability. He also wants to help the city get a grocery store again, after Hen House closed last year.

He began as a volunteer firefighter in 1976 and helped implement the integration of the Merriam and Overland Park fire departments. He retired as fire chief and fire marshal in September 2014. He lives with his sister, Beverly Pape.

Editor’s note: This story has been updated to clarify Jason Silvers’s goals in seeking election to the council. If elected, he hopes to keep Merriam an affordable place to live.

Merriam not ready to make decision on 2020 pool season 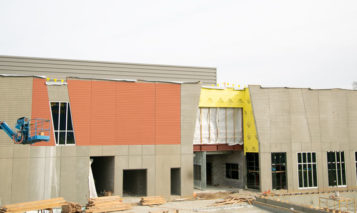