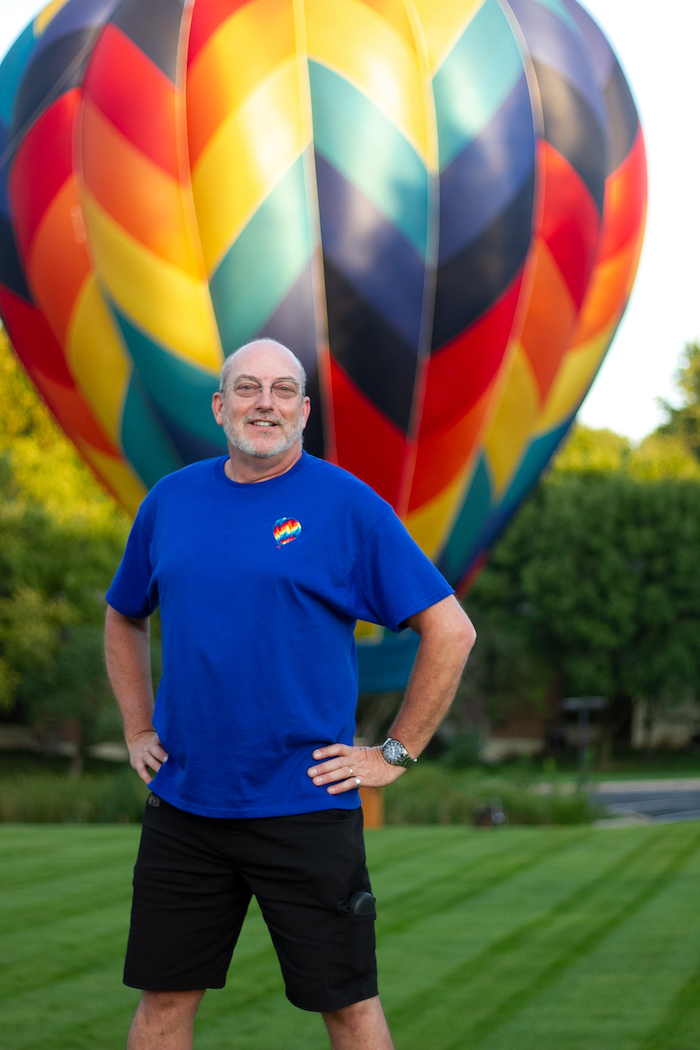 David Reed has a lifelong passion for round, colorful things, some big, some small. That includes his marble collection but it’s much harder to hide his hot air balloons. A hot air balloonist since 1984, Reed is probably most himself when he’s a thousand feet up in the air. Besides ballooning, Reed engages in other hobbies, including stain glass and marble collecting (“I like round, colorful things, what can I say?”) A certified dental technician, Reed runs his own company, Cirrus Prosthetics. He lives in Shawnee with his wife of 30 years, Carmen Reed. They have three children/crewmembers, two of whom are still living at home.

We’ll talk about my most beautiful flight.

It was at the Lake of the Ozarks. It was a morning flight. We launched near the lake and flew to the north and the lake was to our west.
So we weren’t actually over the lake, but it was a fall morning and there was fog all over where the lake was. It was the one flight where a cloud formed below me and I was able to see the shadow of the balloon for a short time. And that was the only time I’ve ever seen a cloud below me in a balloon.

It was a very beautiful fall morning flight at the Lake of the Ozarks and it was just one of those postcard flights.

In a balloon, the only noise that you have is the burner that creates the heat. And so when you’re not burning, you can hear people, dogs, cars, animals rustling in the woods. It’s amazing what you can hear at higher altitudes as well. The sound will carry.

I would say we were a thousand feet. It’s not that high. It was just a very peaceful picturesque sunrise morning flight. As a balloonist, those are the flights that you truly remember.

Another memorable flight was in Albuquerque, New Mexico, where they have the Albuquerque International Balloon Fiesta. You can fly before sunrise and after sunset in a balloon if you have position lights.

In Albuquerque, they always fly in the morning and they have a bunch of balloons, usually 10, that will fly what’s called “dawn patrol.” They will launch before sunrise, and it’s really kind of cool because the burner will illuminate the balloon in the air, you know, and they’ll kind of glow a little bit. And I went along with another pilot on a dawn patrol flight, and that was the only night flight that I’ve ever done, dark flight. And so that was, that was another memorable flight.

Ballooning is a good weather sport, and sometimes the weather can be marginal and the conditions can be questionable. Typically balloons don’t fly at winds over 10 miles an hour, and sometimes when the winds are right at that edge and you can still fly, that’s when it gets interesting.

The more wind that you have at inflation, the more the balloon will oscillate. And so you’re trying to control it as you’re blowing it up. And then, conversely, when you land, there’s no landing gear. So the basket is your landing gear. So in a high wind situation, you’re going to be dragging your basket at 10 miles an hour until you can stop, and there’s no brakes.

As a human — and I joke — you are reduced to ballast. I try to teach people that when you’re in a balloon, yes you’re a human being, but you’re also ballast. And so as you’re coming in on a high-wind landing, you don’t want your ballast to jump out too early, because the balloon will go back up. So you have to ride out that high-wind landing until the balloon can either come to a stop or will deflate and you no longer have a seven-story sail that’s catching the wind.

But what’s really neat about the balloon is there’s really no sensation in motion. You’re flying with the wind so you really don’t feel the wind. Once you get up to speed and you’re moving with the wind, it’s a very, very calming experience because there’s no sensation of motion. It’s very smooth and it’s the closest thing to floating you can find.