The Overland Park-based community center has raised $10.3 million of its $11.5 million goal for a major expansion, the Staenberg Family Recreation Complex, which will be adjacent to the existing facilities near 115th Street and Nall Ave. Community center leaders and capital campaign donors celebrated the kickoff of construction with a groundbreaking ceremony Tuesday evening.

“We are much further along with our campaign than we expected to be at this point and we are thrilled to be so close to qualifying for this important milestone match,” said Jim Sluyter, president and chief executive officer of the Jewish Community Center.

Center officials said expansion has been driven by growth in both membership and the increase in programming. Membership is up 47 percent since 2007.

“Growth is a good thing and a bad thing,” said Andrew Kaplan, board chair of the Jewish Community Center. “Growth is a great thing because it continues to show we’re making an impact in the community. The hard part is we’re busting at the seams, and growth means dollars. And you have to raise money to build.”

The 32,000 square foot expansion will be located in what is now green space on the west side of the Jewish Community Campus between The White Theatre wing and the Fitness and Sports facility. The addition will include a new entrance to The J’s Fitness and Sports facilities, a new gymnasium, an indoor turf field, an additional art room, renovated Fitness Zone and childcare area, dedicated dance studios and a yoga studio.

Here is a rendering of the lobby area of the recreational complex: 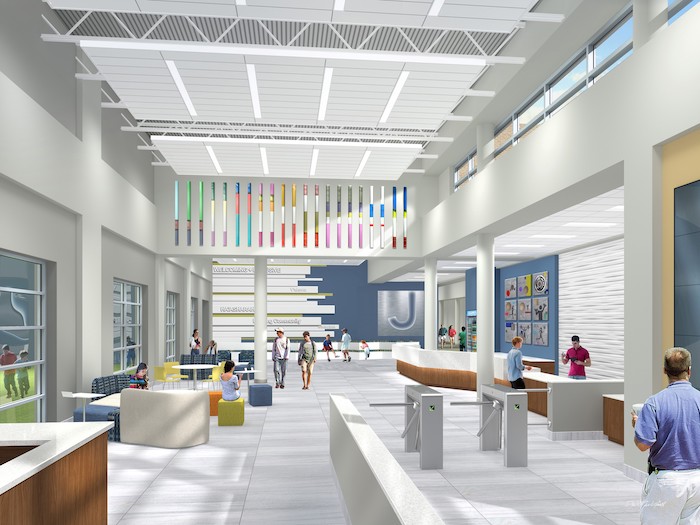 Community center officials said the expansion allows for additional youth and adult recreation and fitness options, including summer camps, pickleball, volleyball and futsal. By meeting its fundraising goal, the center will be able to expand its original plans to include outdoor pool amenities as well.

About $9.5 million will cover construction and fixtures costs, while $2 million will go into an endowment to fund annual operations and maintenance.

The Staenberg Family Recreation Complex will be the second major expansion at the community center since it opened in 1988. The White Theatre Wing was added in 2005, including the Lewis and Shirley White Theatre and the Heritage Center.

Kaplan said a recreational facility fills the need for continued programming if the weather is too hot, cold or stormy for outdoor play and practice.

“The J is all about community — we take very seriously our middle name, which is community,” Kaplan said. “What we’re really trying to do is continue to have places where people can build community.”

The design and construction of the expansion is led by local firms Davidson Architecture + Engineering (DA+E) and contractor MONARCH.