A review of Lenexa’s transportation system found that the city is doing well on serving vehicle transportation needs, but it could use some improvements on walkability and bikeability.

These were some of the findings presented to Lenexa city leaders on Tuesday when they got a first look at the results of Complete Streets, a year-long study on the development of a more complete transportation infrastructure in the city.

As a result, the Complete Streets program proposes adding 70 miles of bike lanes and sharrows, or 19% of the city’s 365-mile road network, as well as adding 69 miles of trails to the city’s 43-mile trail network.

The program is the outcome of more than a year’s worth of work by the city of Lenexa, Olsson and Associates, Toole Design and Venice Communications to build a plan for a network of infrastructure that focuses on comfortable, efficient connections in transportation that considers the needs of all users. A copy of the city’s Complete Streets program is available for viewing on the city’s website.

In the presentation, City Manager Beccy Yocham noted that the program does not include a timeframe or dedicated funding; rather it acts as a living document and guideline as the city determines capital improvement projects and applies for federal funds.

“This is not a perfect product; they never are,” Yocham said, “but I do think it represents a significant step forward and already, staff is using the information in there to think about what are some good first steps that we can take to really start to put some momentum behind the things that you see there.”

Challenges of building a bike network in Lenexa

Jeff McKerrow with Olsson and Associates said Lenexa faces unique challenges building a bike network, compared with cities like Overland Park that have grid systems. For instance, the city has fewer streets that run straight north-south or east-west, and cyclists often find their paths blocked by high-traffic areas that are unsafe and must be avoided or carefully navigated.

The Complete Streets program made several recommendations to the city’s ordinances that address usage of motorized skateboards and bicycles (like e-Bikes), bicycle parking requirements and related items.

McKerrow noted that the city is in Phase 1 of its new bike share program, another initiative that builds upon the Complete Streets program.

The Lenexa city council’s feedback was mostly positive, although many city leaders noted they wanted to ensure vehicle traffic would still be able to travel across the city efficiently.

“I think the study provides a good framework going forward of best practices for development going into the future,” said Councilmember Corey Hunt.

Councilmember Tom Nolte said he thinks the study focused too much on the needs of cyclists and pedestrians, and didn’t provide enough insight on the needs of public transit, freight, or emergency vehicles. Nolte added that he hoped the program would also address public transit and identify nodes to improve.

Councilmember Dan Roh said he thinks the study is a gap analysis of the city’s transportation infrastructure — those gaps primarily being sidewalks, bike paths and connections for those users.

McKerrow said the program is not designed to reduce the ability of vehicles to travel efficiently across the city.

Mayor Michael Boehm asked for a copy of the full survey results so he could gather more context around the responses. For example, the results found that cyclists believes it’s dangerous to travel through the business parks at the I-35/I-435 interchange, but he doesn’t want to encourage bikes in business parks “from a safety perspective.”

Lenexa residents and members of the public who voiced their support for the Complete Streets plan cited a need for infrastructure that could accommodate all users, including those with limited mobility.

Jeff Carroll, a Lenexa resident who leads local group I Bike Lenexa, stressed the need for bicycle-friendly infrastructure that supports cyclists trying to navigate the city.

The city council will review the study and recommendations at a later meeting. If the council adopts the Complete Streets plan, then city staff may begin incorporating some of the projects into the city’s capital improvement program (to be discussed in October). 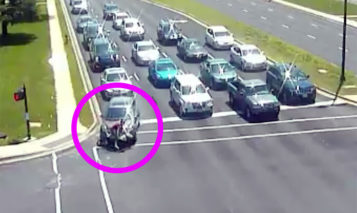 Need a reminder of why it’s important for motorists and cyclists to ‘share the road’? Check out this video from Overland Park police