As design plans continue to develop for R Park, the Roeland Park city council this month heard updates on the $1 million phase one improvements during. City council approved a $1.7 million three-phased plan for the park in March, preceded by the approval of engineering and design work in February.

Phase one includes a shelter, two family restrooms with accessible parking and asphalt removal for additional green space. The following five alternative design options for the shelter were discussed:

Councilmembers posed concerns about option one, such as whether or not a fireplace will be used and what visitors might burn. Councilmember Claudia McCormack asked if the fireplace was crucial to the design of the shelter, and the design team said it was not designed as a structural component.

Additionally, the shelter has been scaled back from its original intent to hold 40 to 60 people. The design team did not say how many people the current design could hold, but that the shelter has been designed to hold seven tables or six larger tables. The shelter would be situated to provide the maximum amount of shade.

Materials for the shelter include metal roofing, wood decking, wood timber trusses and joints, decorative structural metal panels, and steel beams and columns. Limestone will be used for the structure’s stonework and will follow a beige and brown palette. The restroom siding will be made of “Fiberon or an approved equal,” which the Parks Committee selected and requires low maintenance.

Here’s a look at the current iteration of the design for the restroom building: 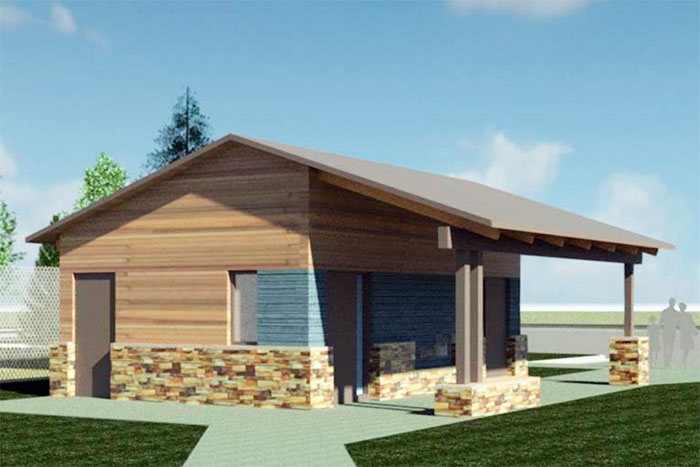 “We wanted to bring you up to speed as we move into the next phase,” Moody said. “We’re going to be spending more time developing the details…so we’d rather make the changes at this point rather than down the road when we get ready to put this out for bid.”