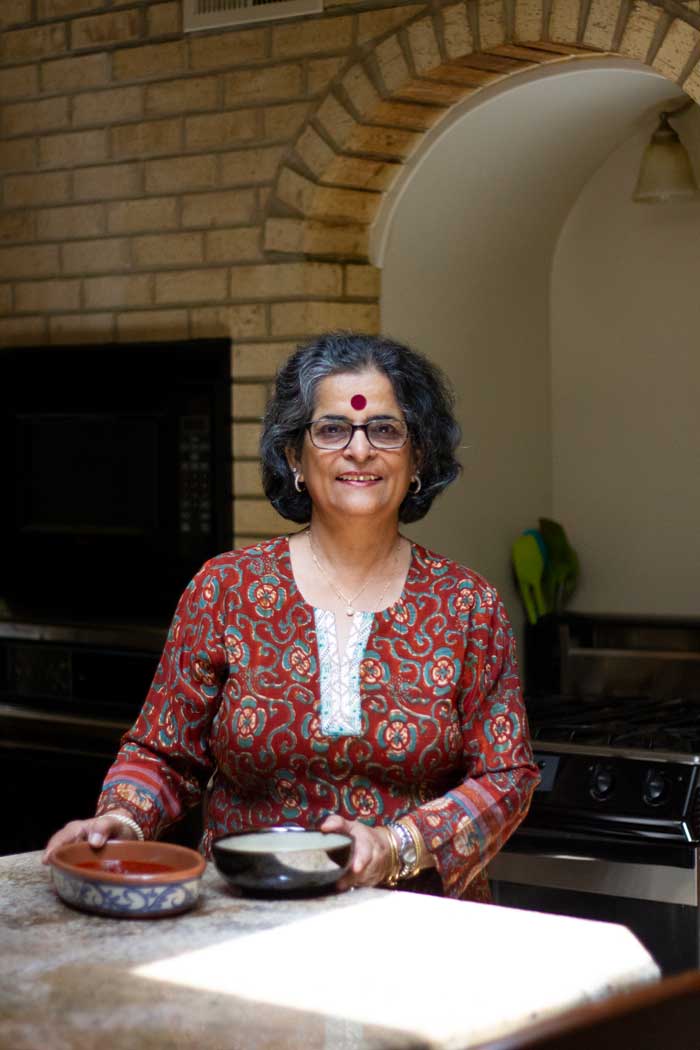 Every few weeks, dozens of cooks gather in the kitchen of Jyoti Mukharji to learn techniques for cooking Indian food. Her cooking operation is now a nonprofit, and she donates her work to charities as well. Born and raised in India, she studied medicine in New Delhi where she met her husband, Jhulan Mukharji, who is a cardiologist at AdventHealth Shawnee Mission. Her passions are cooking and family. She is very proud of all of her sons. Auyon plays in the indie folk band Darlingside, and Aroop is working on his doctorate at Harvard University. She lives in Prairie Village with her husband and their oldest son, Arnob.

This started as a fluke. It was not something like I had a vision or I had planned anything.

When our oldest son, who was at Shawnee Mission South, when he was a senior and he had been vocationed into where he was going to be, I think I dropped all my apprehension, my anxiety. My worries just all went by the wayside. And I decided that I wanted to give to the community because the community had done so much for us in raising our son. So I inquired about volunteering and doing some philanthropic work.

A friend of mine was on the board at Headstart in downtown Overland Park — that is now called Growing Futures Early Education Center — And so she asked me to go see that and I went and saw it and it was just like I was in the right place at the right time. And I decided that that is what I wanted to do because I passionately believe that every child has a right to a good education. So I started volunteering twice a week and I would go help the teachers and oh, it was such a moving experience. One and a half years after that, I was asked to be on the board of Headstart.

I did it for four years, and I would invite two of my friends on the board with their spouses to join me when I would host this dinner. The same people bought it every year. They loved it so much that they would come every year. We’d raise the price, they’d come back again.

One of these friends happened to be of Greek descent and she said, you know, this is so much fun. I think I’m going to donate a Greek dinner.

So she went and told the board member who used to do the auction that I would like to donate a Greek dinner. So this board member came to me and said, instead of having two dinners, why don’t you do a cooking class? And I said, I’ve never done one in my life. And she said, you know, there’s always a first time.

That was it. I did my first class on Feb. 6, 2010. And when I finished the class, my husband who was hiding in the back came out and saw this glow on my face and maybe a halo around my head, I don’t know, and he said, it looks like you really enjoyed it. And I said, you know what? It took me to another world. And that was when I realized that my passion to cook as a mother and my passion to teach as a little girl just all came together.

And here I am, almost nine and a half years later, with almost 4,000 people through my kitchen, this very kitchen. It’s been quite a journey. There is no replacement for hard work and a good family. Because my entire family is involved in this.

My youngest one, he does all the typing (recipes). Auyon provides the music; when everybody’s eating, that’s when I put on their music. I’ve sold almost 700 of their CDs in my class.

And our oldest one helps me in the kitchen when everybody leaves. My husband is my moral support. My husband is also an artist, so every menu that I create, he has a lot of input in the menu because of his taste buds, the color, scents, the whole bit. I would never have imagined if somebody had told me that this is what I would be doing later on.

The fact that I worked so hard with our children to get them where they are today, that is all in a sense coming back, and their contributions to what they do for me and for my husband — because he’s an artist, he does have a lot of exhibitions — is just unbelievable.

I never wanted to have any regrets if I died young, and the children were little, that I didn’t do enough for them when I was raising them. And so I think that fire in me to do the best I could for them is all just… when you’re there to see whatever you instilled in them just comes back a hundredfold, it’s a beautiful feeling.