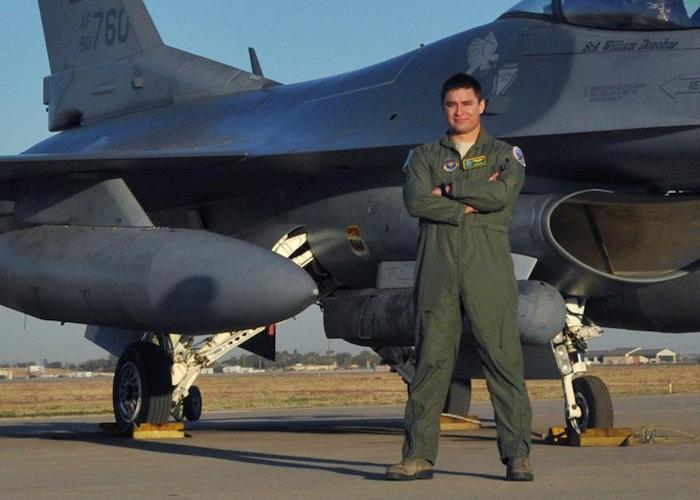 After hundreds of hours in training, Anthony Quirarte had finally achieved his lifelong dream of becoming a fighter pilot. He flew F-16s and was trained to fly pretty much anything — including the more familiar aircraft as seen on the movie “Top Gun.” But only a few months after completing his training and flying on his own, cancer struck. He was medically retired from the U.S. Air Force in 2014 so he could go through treatment. He was active duty Air Force before switching to Air National Guard, serving a combined 11 years in the military, partly working air defense for Washington, D.C. After chemo radiation, surgeries and a bone marrow transplant, doctors now consider him cured and cancer-free from “gray zone” lymphoma. He lives in Prairie Village. Photo submitted by Anthony Quirarte

Going through the training, they are always pushing you through very fast. You go from flying what is just a little glorified aircraft that you might see buzzing around, 120 knots max, to a much more powerful airplane, an 1100 horsepower, propeller-driven airplane that kind of looks like a World War II fighter. And you’re going very fast: 250 knots, so that’s close to 300 miles per hour.

The second that you start to be like, OK, I’m not completely overwhelmed, they switch you to a jet fighter, it’s called a T-38. It actually was the aircraft that was in the first Top Gun movie that was the MiG-28. They’re very fast. They could breach the speed of sound, they could go Mach 1.05, Mach 1.1. I love flying them. They’re a great airplane to fly.

But then you were expected to learn that airplane even faster while you’re going much faster and then you’re doing more advanced flying, like low-level navigations in formation with another airplane.

Then you go to your final aircraft, the F-16. It can go Mach 2, twice the speed of sound. I was actually quite lucky and I got to hit Mach 2 once. It was much less exciting than everyone expects. You have to be up high to go that fast. You watch your air speed indicator go faster and faster. We were even in a dive, but we were so high up that it’s kinda hard to tell.

At some point suddenly they’re like OK, you have to learn a whole lot more, but we’ve taught you all of the basics. One day I just remember being there and flying, and for the first time I was like OK what do I need to do? Actually, I’m good, I just need to stay in formation. And I’ve done everything else that I need to do.

That was the moment that I started having so much fun.

We were going out into the mountains above Arizona and there were towering, tall thunderstorms, and we went and chased around them. We were flying through the clouds at 600 mph.

I think that was the first time that I was flying when I wasn’t being graded. I was not stressed out about what I have to do, what they’re going to say at the end of the flight. I’m just out here to perform a mission. We were doing air combat maneuvering, practiced dogfighting.

I remember that flight in particular, my flight lead told me to go to the other side and I just flipped up and did a barrel roll over him. That was the coolest single thing I did. I hadn’t really thought it out. He was happy that I did it quickly and that’s all he cared about. We just rocked on with the mission.

Being in a fighter jet is the only time that I felt like I existed in the moment where physics doesn’t exist.

If you want to go straight up, you can point your jet straight up and just go flying through all these clouds. If you see a cloud, you’re like, oh that’s a medium-sized cloud, and you think it’s maybe six football fields long or something.

You know it’s big, but when you get up to it you’re like oh my god, this is the size of all those mountains stacked on top of each other. It’s just so huge, and the ability to go and fling your aircraft around everything is just so incredible and so freeing.

Even to this day, sometimes I forget that I am a fighter pilot. I got to do something I spent years of my life really wanting to do, and I had to fight through it. I had to sacrifice a lot to get through it.

And sometimes I get sad because I spent a huge amount of my time and energy in life trying to get to that point when I only got to do it for a relatively brief period of time, six months or so. Of course that was right during when they shut down the government, so I wasn’t able to fly as much as I normally would have which, I mean, might’ve been a blessing in disguise because by that time I had a cantaloupe-sized tumor in my chest.

It turns out that I had cancer for a while and I had been feeling weird and I even passed out in the jet once because of it. My second-to-last flight out in Arizona, we were doing really intense, high-speed dogfighting, and I passed out because the tumor was pressing against my heart.

I don’t think I’m physically healthy enough to do it anymore. I had even talked to the 810 unit out in like Whiteman. But yeah, my heart is there. If I could go back, I would go and do the same job for less pay. I would pay to do that job. I loved being a fighter pilot and every little boy’s dream about how great it was or would be is, in my opinion, true. And I just loved every moment of it.