The dream of a group of Overland Park history buffs has become a reality.

Since the group’s inception back in 1994, the Overland Park Historical Society has had its eye on the building at 8001 Santa Fe Drive, where the original depot that served William Strang’s interurban railroad was built back in the early 1900s.

Earlier this month, the group closed on the purchase — and is preparing to transform part of the facility into a museum dedicated to the city’s early years.

The building went through many additions and renovations over the decades that covered up the original structure. Most recently, the building was home to Suburban Flooring and Paint. But when the family that ran that operation announced they were closing after more than half a century in business, the historical society’s leaders stepped forward with interest in buying the building.

The organization’s leaders had reason to believe that part of the facade of the original depot building remained intact, though buried behind walls that had been added over the years — but no one could be sure until they bought the building.

“It was long rumored that west facade of original depot was still was in there,” said Brad Moore, president of the historical society. “There were a lot of naysayers who said that’s ridiculous. Frankly, I didn’t know what to think. I had to be convinced.”

Soon after the purchase had been finalized, Moore and two others tore into the building.

“And after we pulled that newer wall back, we were looking at the 1906 wall with the stone wainscotting and the lap siding,” he said. “It needs some work. But it’s all there.”

Finding the wall intact was a huge relief, because the historical society viewed its presence as key to their idea for the space: Converting it into a museum that focuses on the Strang-era history of the city.

“We’re going to restore that wall so it looks just like it did in 1906. So when you walk into the museum, you’ll see the wall, and we’ll also have a replica of one of the trolley cars,” Moore said.

The group plans to convert other parts of the building into a conference room, educational center and facilities for use by archivists. Here’s a look at their plans for the project: 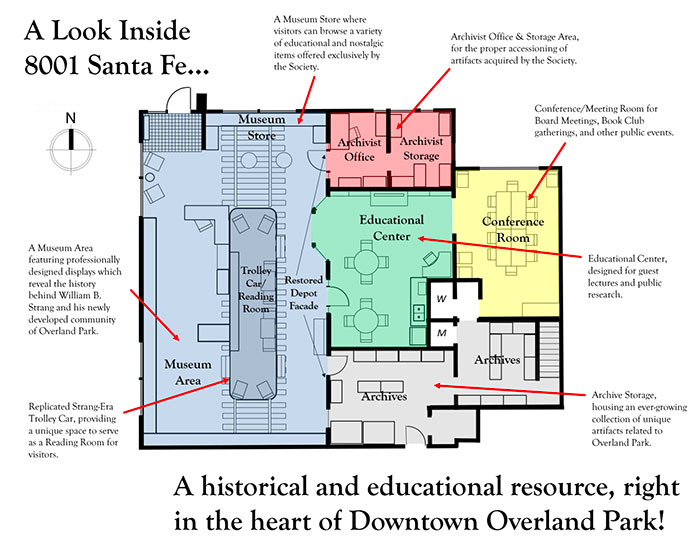