Officers in Mission and Overland Park continue to investigate after several businesses were broken into early Monday morning.

Mission police found someone attempted to break into the back door at Planet Sub, 6915 Johnson Drive. Officers also found the glass in the front doors of CBD American Shaman, 5810 Johnson Drive, and Yellow Lab Imaging, 5812 Johnson Drive. Another break-in attempt was made at a business in the 5800 block of Beverly Avenue. Mission officers located the break-ins around 1 a.m. 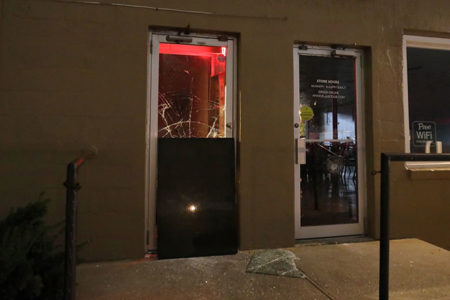 In Overland Park, an alarm alerted officers to a break-in at Body Art, a tattoo parlor at 7006 West 83rd Street, and an attempted break-in next door at 83rd Street Liquor, 7004 West 83rd Street. Both of these are believed to have occurred just after 2 a.m.

An alarm also notified Overland Park officers about 2:30 a.m. of a break-in attempt at Heartland Pawn & Jewelry, 9501 West 87th Street. A delivery driver called Overland Park police about 4 a.m. to report that the glass in the front door of the liquor store at 10324 Mastin St. had been broken out.

Overland Park Police spokesperson Officer Blake Larsen confirms their officers are investigating four business burglaries which are believed to have occurred between 2 a.m. and 5 a.m.

“The suspect is believed to be driving a blue pickup truck,” Larsen said in an emailed response to questions. “A similar vehicle was observed on surveillance video in both Overland Park and Mission burglaries.”

Police in both cities say the suspect or suspects used something to break the glass doors. Recorded radio traffic indicates that at least two of the businesses were hit by the suspect’s truck in an attempt to get through doors.