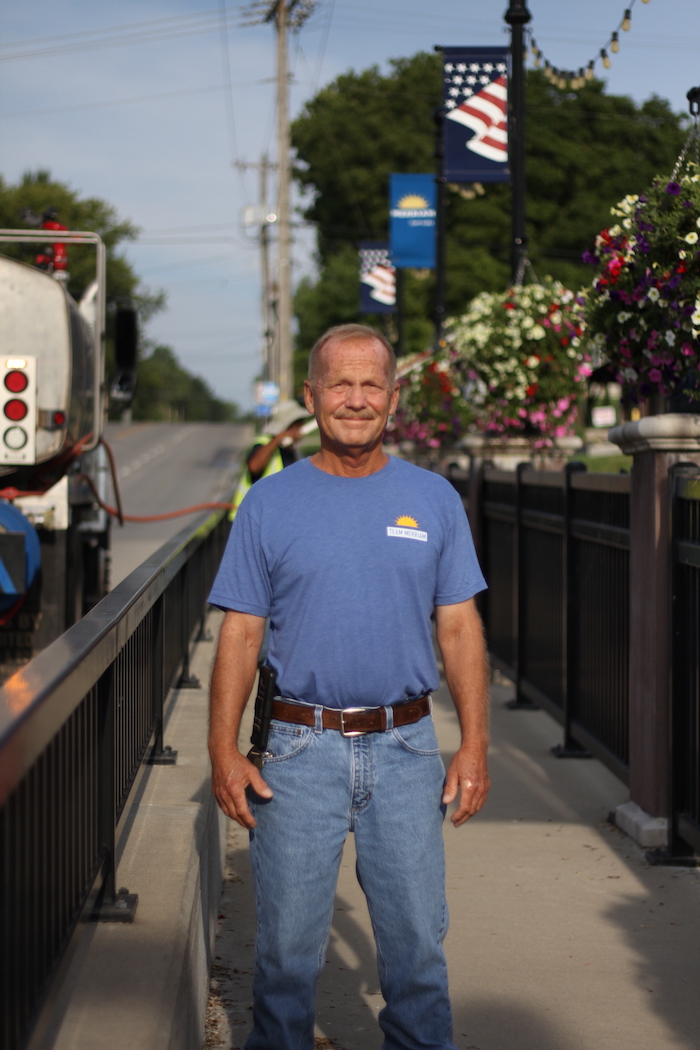 Whenever you pass through Merriam, you may notice the flower baskets hanging along a few streets. Mark Fauser, a Merriam resident for the past 35 years and construction foreman with the city, said he and his fellow public works crews take great pride in those flower baskets. But it’s not an easy process — the flowers take hours and hours to maintain each week. When he’s not out working with the public works crews in the city, Fauser is at the family farm near Rantoul, Kansas, fishing and spending time with his dog, Ranger. He lives in Merriam with his wife, Sue Fauser. They have two grown children.

We want to make Merriam beautiful. I mean, we want it to look good. I have a vested interest because I live in Merriam, and I’ve worked here for 23 years for the city.

Rain isn’t enough. It’s [a] misconception – we’ve had people comment on Facebook before, that oh they’re out watering and it rained. It’s just not enough unless it’s been raining for two or three days. And if it rains a little bit, those guys are still out watering, and they water the baskets until they are saturated. Typically it takes about 45 seconds a basket.

Currently, we have baskets that are out there on Merriam Drive, Johnson Drive, Ikea Way and one side street by the community center, Kessler. It takes approximately four hours to water all the baskets. The watering crew comes in at 5 a.m., typically done by 9.

The way we keep them looking good is once a week they are fertilized, and insecticide as a preventative measure is put on them. Seeing as that they are by a streetlight, moths are drawn to the light, and sometimes, the flower petals would get like a shotgun effect because they eat the flower petals.

It’s been a process of trial and error in the beginning of how to do it. We started this basket program roughly 15 years ago with somewhere between 40 and 50 hanging baskets. It has grown to 214, and we’re pretty much at the point where, maintenance wise, we’re at a threshold, I would say. It’s true. I mean four hours, that’s half of an eight-hour day for two guys to take care of them.

At one time, public works went around with five-gallon buckets and watered the few that we had out. And then a lady that worked at True Auto Parts in downtown Merriam volunteered and went around with a wagon watering the plants. And then when we started adding more and more and more, then we took over the watering again and it’s been that way ever since.

We plant them in the beginning of April, roughly. It takes approximately a dozen public works employees eight hours. There are 40 individual plants per basket.

And then we hang them on a cable system we have behind the public works building. The cable system won’t hold all 214, so the rest of them have to go somewhere. So we set them on the ground on plastic so that the grass doesn’t grow up around them and stunt them. And we have to worry about frost. When they forecast low temperatures or frost, then we have to get out and cover all of them with plastic and anchor the plastic so it doesn’t blow off.

Then they go out about the first or second week of May.

The best part is when you have a good year like this year. We’ve had plenty of rain, ideal temperatures, all the baskets look really good. And the satisfaction is not only that, but the compliments that we get on social media.

We take pride in just making it look nice. The city really strives in that, and it’s not just public works, but city hall, parks and rec, everyone strives really hard to make this just a nice, quaint little city.