Leawood on Monday became the largest city in Johnson County thus far to adopt a non-discrimination ordinance that provides legal protections for LGBTQ+ individuals. The ordinance gives people who believe they have faced employment or housing discrimination as a result of their sexual orientation or gender identity an avenue to file a complaint.

The council’s unanimous vote in favor of adopting the ordinance stood out among other Johnson County cities, where deliberation over adoption of an NDO has sometimes been drawn out over a few months. Leawood had added consideration of an NDO to a list of its goals for 2019, but the issue hadn’t been brought up for discussion at a council meeting until last month after resident Rob Groves presented a petition from residents’ who supported the adoption of an NDO.

The council was presented with draft ordinance language to consider for the first time on Monday, and adopted the measure after short discussion.

One Leawood resident spoke about the ordinance during the meeting. Shawn Moore noted that he and his husband had moved to Leawood from New York five years ago after careful consideration of the kind of community where they wanted to raise a family. He said that adoption of the NDO would send a powerful signal that Leawood was a welcoming community to all.

Multiple members of the council credited Ward 3 Councilwoman Lisa Harrison with working to get a non-discrimination ordinance added to the city’s goals for the year. On Monday, she cheered its passage.

“I have to believe that most of the people in this room have never really experienced discrimination, and may have trouble imagining what it really feels like,” Harrison said. “That being said, I’m very proud that the city of Leawood has taken the initiative to take this step to discourage discrimination in our community.”

Ward 1 Councilman Andrew Osman spoke out strongly in support of the measure, but noted that he was disappointed that cities were having to take up such ordinances because the state and federal government should be providing such protections.

At nearly 35,000 residents, Leawood is significantly larger than the other municipalities that have adopted NDOs. Prairie Village, which has about 22,000 residents, had been the largest area city to adopt an NDO previously.

The city of Shawnee, which has around 65,000 residents, is set to take up discussion of an NDO at a council committee meeting tonight, though the prospect of such an ordinance has drawn organized opposition there. State Sen. Mary Pilcher-Cook sent a message to supporters on Sunday encouraging them to show up to voice their concerns with the proposal.

“As we have witnessed in other states with cake bakers, photographers, florists and others, when sexual-orientation and gender-identity ordinances are passed, threats and lawsuits follow, violating businesses and individuals’ rights to free exercise of their religion,” Pilcher-Cook wrote.

That meeting is set to begin at 7 p.m. at Shawnee City Hall.

Overland Park, with 190,000 residents, is also set to take up consideration of a non-discrimination ordinance through its community development committee next month.

A copy of the ordinance approved by Leawood Monday is embedded below: 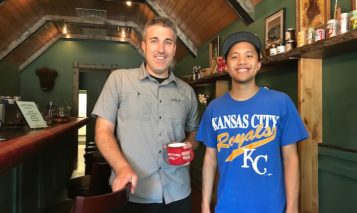