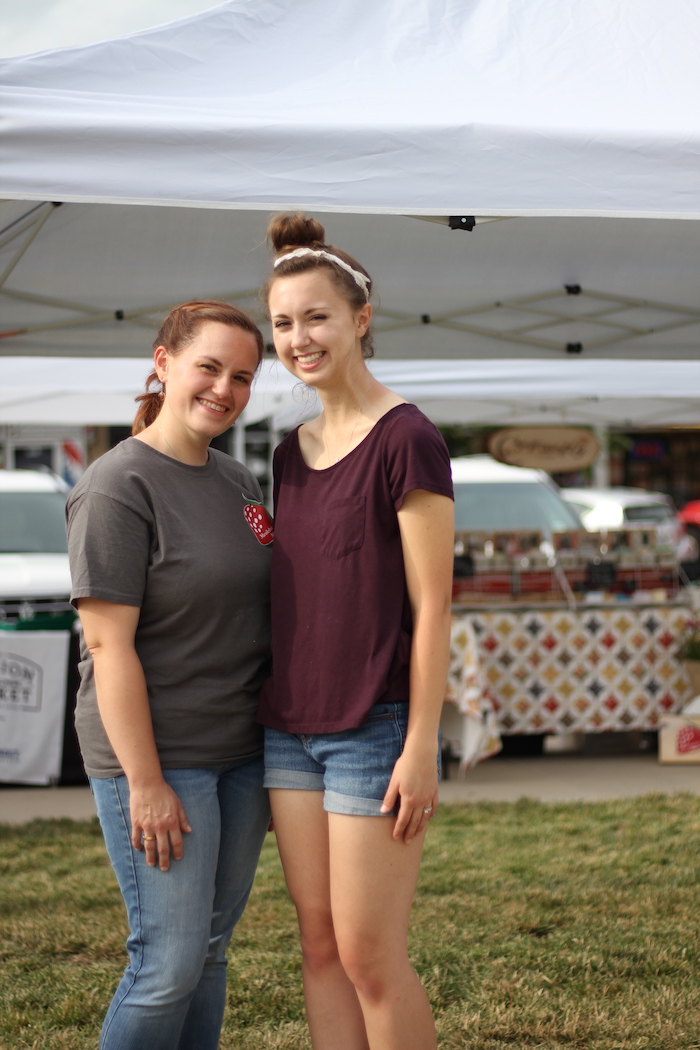 Cut flowers are a new thing for Patty Casalou, a farmer and small business owner in Lenexa. She collaborates with her sister, Laura Wuthnow, on many crafting projects on their family farm, Meulebeke Market. Named for the Belgian province of her family’s roots, the farm also offers pick-your-own strawberry patches, tomatoes and sweet corn. Many of their products, such as the soaps from their small business, Firefly Soap Company, are named for important people and memories from their heritage. In fact, the sisters have long family ties to the Shawnee area; their maiden name is VanLerberg — their grandparents Albert and Cleo VanLerberg ran Van’s Food Center, a former grocery store in downtown Shawnee. Casalou and her husband, Michael Casalou, also run Casalou Creations, a crafting business. They live in Overland Park with their 3-year-old daughter. Pictured above: Patty Casalou (left) and Laura Wuthnow.  Meulebeke Market is at the Mission Market the rest of August, Thursdays, 4:30-8 p.m.

It’s one of those you don’t really think about until it’s around.

Last year, one of my sister’s friends wanted to get into beekeeping, so they asked us if they could put up a couple of beehives at the farm. And of course we were like, sure, that’s extra pollination for us. That’s good for our plants, good for your bees with their honey production, sure.

So fast forward, we started planting all of these flowers for this year specifically because we’re doing more flowers than we did last year and, you know, bees love flowers because that’s their thing. You get pollen from flowers, they pollinate flowers.

Now, during the summertime, you expect to see a handful of bees. You just go walk around outside, you’ll see a bee or two. We specifically go out to pick flowers at like six o’clock in the morning because of the bees, because this is what happens: You come out there, they’re everywhere.

They don’t exactly go back to their hive all the time to sleep. So we come out and we find bees sleeping on flowers.

If you’ve ever seen a bee sleeping on a flower, they don’t look comfortable at all. They don’t just sit there on the center of the flower. I have a picture of one: It’s just sitting on a leaf and hanging out like that, but it’s completely asleep. It has its rear end on a leaf and is holding onto the leaf above it. I’m like really? That’s how you’re going to do that?

We want them to be asleep. A bee is really not going to sting you. They’re not super aggressive like wasps. So sometimes, I’ll try to nudge them off. I had one the other day, (I was) tapping the flower, it was just not doing anything. I knocked the flower, it fell off, still asleep sitting on the ground next to the bucket.

But yeah, when they start waking up, they’re everywhere. They swarm the sunflowers the most. Every sunflower you see probably has a bee on it. You’re walking down this row of sunflowers and they’re just all over the place, like you’re in some sort of bee sanctuary around you. Most of them are pretty big. It’s a little unnerving.

I’m not really scared of them anymore, but I get startled and if I’m not really awake, it’s like these bees buzzing around your head. Or, you accidentally cut a flower and disturb one and it kind of gets mad, it’s like, sorry I stole your flower, I’m sorry.

The only time that I was a little leery: Last week I had to take my daughter with me to pick flowers. So we’re walking around and she’s pretty much just following us, trying to pick up buckets and you know, you hand her a flower and she might stick it in the bucket.

I look over, there’s this giant bee in her hair and you know, mama bear instinct steps in and it’s like, oh my gosh, there’s a bee on my kid! I don’t know if you’re allergic to bees yet because you haven’t been stung by one.

It looked like it was asleep too and it just decided that oh hey, this looks like a great place to take a nap. I don’t know why; her hair’s not colorful, it’s just brown.

Of course you try to keep a level of calm so you don’t have a crazy, toddler take off running or something or freak out, wave her hand up there. You’re like oh honey, hold on a second, you stay right there, and then me holding her head and using one hand to kind of figure out how I’m going to knock this bee out of her hair without making it angry. Which, it didn’t take much. It just flew off, and it’s like oh OK, crisis averted, bee’s gone.

The moral of the story: You don’t have to be afraid of bumblebees and if you see one sleeping on a flower, “just leave it bee.”