A group of Johnson County Moms Demand Action for Gun Sense in America activists were at the organization’s convention in Washington, D.C. last weekend when word of the mass shooting that killed 22 in El Paso, Texas, broke.

The KC area residents were still processing the news that Erin Langhofer, a 25-year-old Overland Park native, had been killed by gunfire at First Fridays in Kansas City last week, when they learned about what had happened in El Paso.

“We heard about First Fridays while we were there and we thought, oh god, another one,” said Shawnee resident Leanna Barclay, deputy lead for the organization’s Kansas chapter and co-lead for the group of Johnson County volunteers. “And then of course, the El Paso shooting is very sobering. It’s very emotional. People take all these to heart.”

Barclay said the volunteers that weekend went over the organization’s challenges and areas of opportunity, while also learning skills to be more effective in their individual roles. Noting the crisis of teen suicides in Johnson County compared to other parts of Kansas and the growing number of suicidal deaths by gunshot nationwide, Barclay said she and her local group of volunteers feel that their work is urgent.

The organization’s goal continues to be working toward policy that requires universal background checks and also “keeping guns out of the hands of people that shouldn’t have them,” such as convicted felons or people with histories of violence, Barclay added.

Locally, Moms Demand Action has made an impact in legislation, Barclay said, citing a bill passed in the 2018 Kansas legislative session to keep guns out of the hands of convicted domestic abusers.

“I think in Kansas, we are a more conservative state on the issue of guns, but we are making headway, baby steps, and I think people have had enough,” Barclay said, adding that they’ve learned many gun owners in Kansas support universal background checks. “I think people can realize we’re totally happy with people owning guns and hunting and having them for their own security. We would like them to be responsible gun owners, and I don’t think there’d be any responsible gun owner that would argue with that.” 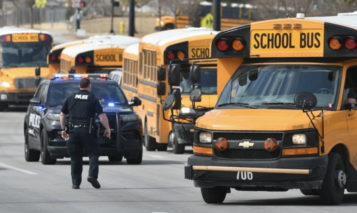