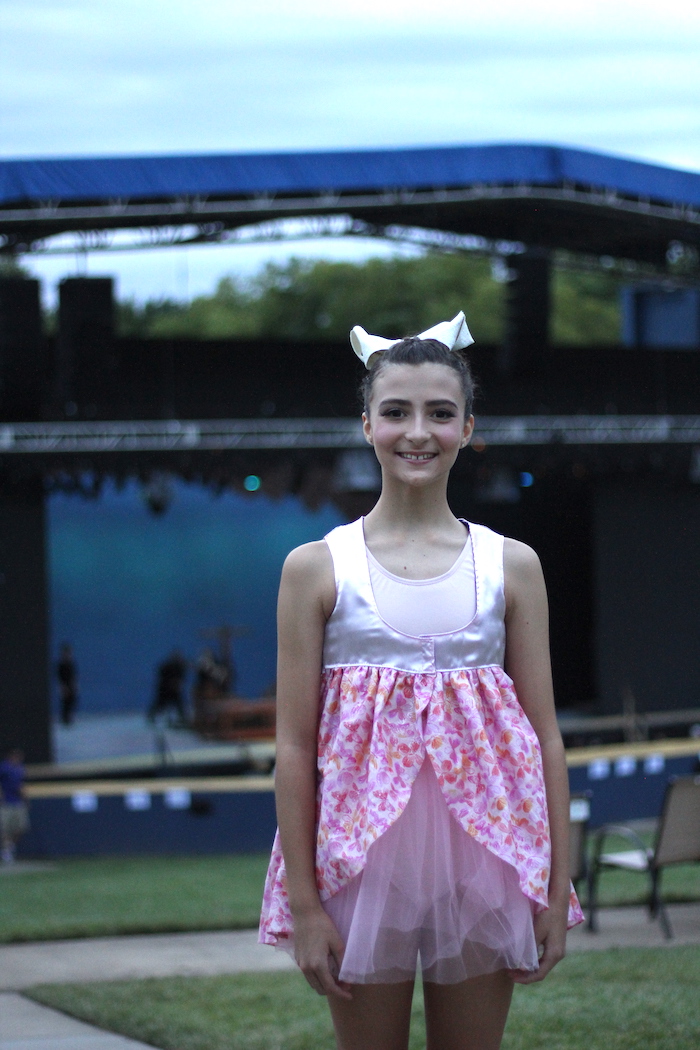 She represents the Lullaby League — as a Munchkin ballerina en pointe. It’s the Theatre in the Park’s 50th season, and 13-year-old Ada Lillie Worthington of Fairway is part of the cast and crew of the production of “The Wizard of Oz.” The production has special significance to Worthington as she follows in the footsteps of her two sisters, Colette and Savanna, who have acted with Theatre in the Park before. Worthington is also in the scenes with the poppy fields and the jitterbugs. Fun fact: The Worthingtons have discovered they are relatives of an actor from the 1939 hit film, itself in its 80th anniversary this year: Meinhardt Raabe, who played the Munchkin Coroner and declared that, after examining the body of the Wicked Witch of the East, “she’s not only merely dead; she’s really most sincerely dead.” Look for Worthington, the tallest of the Lullaby League ballet trio, while “The Wizard of Oz” is playing at Theatre in the Park, Aug. 2-4 and 7-10.

At the dance rehearsal at the Black Box — that’s where we rehearsed — we would usually run all the dance in order, so for me it would be Munchkin and our Poppy scene. We’d run all of those dance numbers, and then the choreographer would be like, OK I thought this dance number wasn’t very clean. It needs some working on. So then we’d go back, and we’d work through that number and make sure that everyone’s doing the same thing at the same time.

I just feel really light and airy. I mean, it does hurt sometimes, but you know, you’re on your toes, so… but it’s just really fun to feel that you’re being a ballerina. It’s just fun to think about.

You almost have to see it. It’s really hard to describe. I also get the correction spot, which means when you turn, you have to find a specific spot on the wall in front of you so that your head stays on that the whole time so that you don’t get so dizzy and you wander off somewhere, so that you just keep your turns very clean and going the same way.

I read the original book “The Wizard of Oz,” and it was cool because I had already started rehearsing and I had seen the whole show through, and so it was cool to see the differences that they made and what they expanded on in the book and see the connections.

I think it’s cool that I get to carry on the tradition of 80 years of “Wizard of Oz” being the show that everyone has liked, like it’s a classic, everyone has to see it. Also with my sisters, this is my first show at Theatre in the Park and it’s really cool that this is my first one and they get to watch me this time, and I don’t have to watch them be on the stage.

I don’t want to spoil anything, but I think it’s going to be really cool. Lots of fun effects.