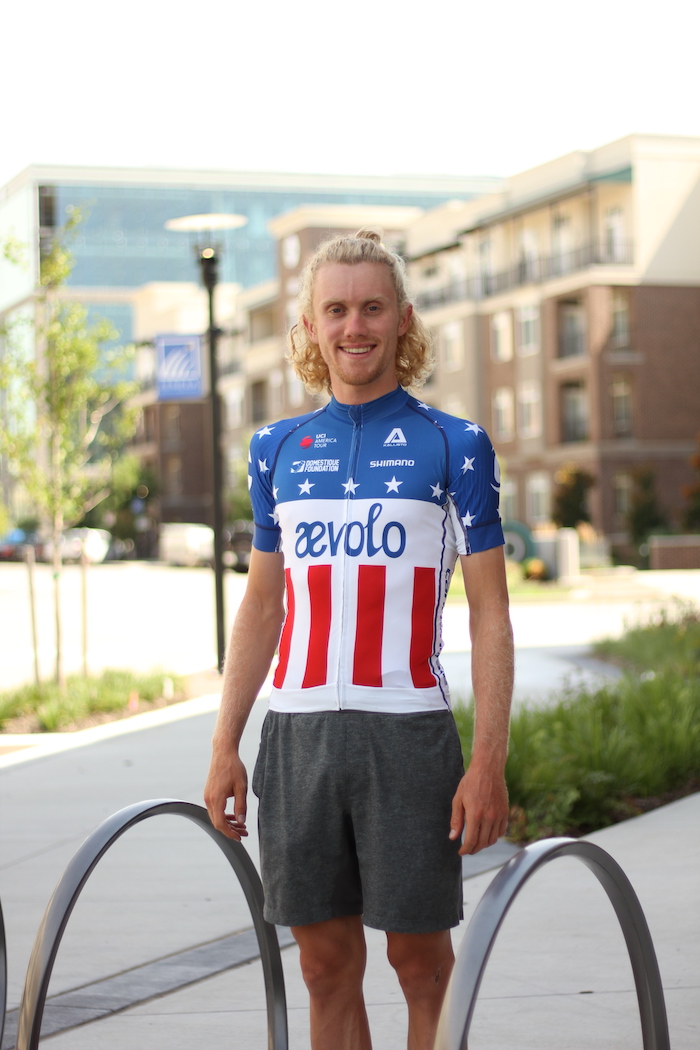 A 2018 national cycling champion, Alex Hoehn recently returned to his Lenexa home for a brief stint before going to Colorado for training. Last year, he won the National Championships United States U23 Road Race. He’s done well in other races (more stats here) and now, at age 21, after cycling in more than 200 races in four years, he is pushing himself to one day compete in the World Tour. Before he took up cycling, he played ice hockey competitively for the Kansas City Jets. This fall, Hoehn is studying economics at Park University’s Lenexa campus. He lives in Lenexa with his parents, who help support his cycling career.

It’s one of the hardest sports in the world, to me. It just requires so much dedication, so much work. The lifestyle that I live is way different than anyone else’s lifestyle.

Today, for instance, was a very typical day: I woke up early, 6 o’clock, ate breakfast, texted my buddies that I ride with around Kansas City that train with me, and we headed out around 7 or so. We just did a big 85-mile loop, so I just got done riding for four and a half hours today. It’s crazy stuff. It’s ridiculous.

So, do that, you know, get home, shower off, make a protein smoothie and then get lunch and then sleep. I have to get a lot of sleep just ‘cause working out for four hours requires a lot of energy. Riding constantly for four hours is completely different than going to the gym and just getting a workout in.

It’s a very mundane lifestyle just because you can’t really do much outside of cycling, stretch and eat right. I mean, eating is completely different. The amount of calories required to eat, for one, is ridiculous. Like today, I burned 3,200 calories, so you can imagine the amount of food I eat every day.

Your body normally burns like 2,000 calories a day just by working at your job and coming home, just by being alive, right? If it’s an even bigger day, in total, I’ll have 5,000 or 6,000 calories that I burned. And so I’m going to need to try to replenish all of that.

Sometimes you cannot eat enough calories. Cyclists try to do that, but it’s just too much. Like, 5,000 calories is an insane amount of food to eat.

I would put it in comparison: A medium Domino’s pizza, if you eat that whole thing, that’s maybe 1,200 calories. We would need four of those, four whole pizzas. It’s just not possible to do. That’s just an analogy of how much we would have to consume to not be calorie deficient. So that’s why a lot of cyclists are fairly skinny and lean — because they are calorie deficient every single day.

Knowing that I have the potential to make it to the highest level keeps me going. What also drives me is just the level of support that I have. I don’t want to let anyone down. My family, for one, has an insane amount of support. They’ll send me anywhere I need to go to get ready for a race. They take care of me and let me not work a normal job ‘cause I don’t have time to do a 9 to 5 job and still try to be a pro athlete. I don’t make money like I would if I worked a 9 to 5, but knowing that I’m still going up and up in this sport, my parents are letting me achieve my dream of a lifetime to get to the World Tour.

There’s no other sport that requires the amount of time that it takes to put into this to be good, and so it’s really fulfilling. I’ve done a couple of national championships, one or two before that, and just got my teeth kicked in with guys similar age as me, but they’d just been in the sport for so much longer. So being able to go into the national championships and doing well, let alone win, was something that I’ve always dreamed of.

Getting close to the finish, there was this big climb with the right hand turn. There was like 5 miles left to go. Up that big hill, I come from the back and just go as hard as I can up the climb, I drop everyone behind me, make that right hand turn, and I basically just solo all the way into the finish and I look back and no one’s there.

I was just full of emotions. I mean the most amazing part about this whole experience was that my dad was there, and so he got to share that moment with me winning my first national championship.

It’s different in basketball or hockey or football. There’s only one team they’re playing against, so it’s a 50-50 chance of winning. For me it’s 1/130th chance. The odds are just so much lower for me to win.

So whenever you get that moment of success, the highs are super high. And let me tell you, the lows are really low. I’ve had some days where I’ve just completely wanted to throw my bike away and just quit because of how hard you have to train to do well. It just hurts bad to do it, but I want to get to the World Tour level because I have the ability to and I don’t want to waste the talent that I was given.