Neighbors petitioned against it, but the Overland Park City Council came down on the side of more affordable housing as they approved rezoning for a small plot of land surrounded by older homes a few blocks west of downtown. The alternative, they feared, would have been big “McMansions” akin to ones Prairie Villagers have seen.

Council members unanimously overrode a protest petition from neighbors near 8505 W. 80th Street seeking to block a rezoning that would allow a developer to build four new homes there.

“I think you will be a lot less happy with McMansions in your neighborhood as opposed to three smaller lots with smaller homes,” said Councilmember Logan Heley.

The land is the last parcel in that part of town that has not been subdivided since the neighborhood was originally laid out, said Dan Foster, who represented the developer. That piece of land had not been split up since the 1940s, he said.

Residents there said they’d come to enjoy the quiet and green space of a forested area on the eastern end of the tract.

All that would change if the plan by owner Frank Pikus goes through, they told the council. Pikus said he bought the 3.47-acre property with an eye to improve a very old and run-down house on the northwest corner. Subdividing into five lots will allow him to build homes that are affordable and in keeping with the character of the neighborhood, he said.

Here’s a look at the proposed subdivision plan: 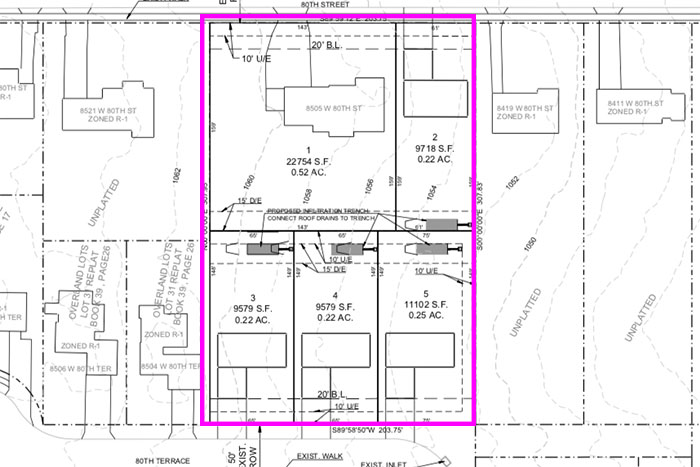 Neighbors were especially concerned about three adjacent lots that they said felt too crowded. “We do not feel it is possible to put three homes on West 80th Terrace and still be consistent with the character of the neighborhood,” said Phil Ellis, who presented the neighborhood’s concerns.

Pikus promised council members he’d keep the elevations low and would not build anything higher than a split level. Many other homes are ranches.

But he said he’s also committed to building affordable homes. Building three homes on West 80th Terrace rather than two, as some neighbors wanted, would enable him to list them at $250,000 to $300,000, Pikus said.

“I’m really proud to be able to deliver homes in that price range,” he said.

The financial picture wouldn’t be as good for two larger lots in that space, he said, because it would make the land more expensive. And since land price drives the cost of the development, Pikus said a builder would seek the most economic alternative, which would be a two-story home.

“What that would do is exactly what these residents do not want,” he said.

Pikus said he would not be interested in building the larger homes that would be expensive and out of character with the neighborhood, but another builder might be.

Still, some neighbors on hand at the meeting said they’d prefer the larger lots with more space between houses. The setbacks will make the whole neighborhood seem crowded, they said. Resident John Knapp said, “I just don’t like the idea why we have to squeeze something in the neighborhood that’s been like it is all this time…Let’s stay like we were.”

But redeveloping older parts of a city is often difficult, said Councilmember Curt Skoog. “This will help invigorate the neighborhood with new capital investment,” he said. The council has often discussed how to get more affordable, or “attainable” housing, he said. “Our biggest challenge is the cost of the land,” he said, citing Prairie Village’s issues with tear-downs. “With this rezoning we can accomplish something that is hard to do.”

Added Councilmember Fred Spears: “If they put in two bigger houses that is going to destroy the neighborhood you enjoy.” 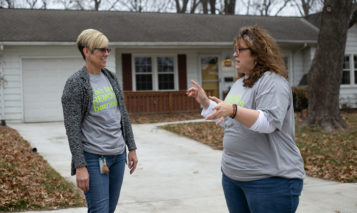 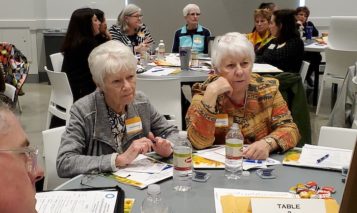