Tidal Wave Auto Spa’s earlier plans were to build a two-story structure — a vehicle vacuum bay with offices and storage above — at 6501 Johnson Drive, as well as a car wash tunnel just south of it. The car wash will replace an old gas station.

The new plans eliminate the second story of the building facing Johnson Drive, meaning the originally planned offices or storage space are gone. Some councilmembers said removing the second story means the project no longer complies with the city’s West Gateway Form Based Code district. The Form Based Code calls for two-story mixed-use development on the west side of the city.

Pettey Hardin, principal of the Kansas City division of Tidal Wave Auto Spa, said they initially tried to plan for a two-story structure, but it was going to come in $1.8 million over his budget. Tidal Wave is building six other car washes in the Kansas City metro area; he said this is the only one over budget.

“I committed to put an extra $1 million…into the project to accommodate for the overages that the Form Based Code would cost, and we really thought that $1 million would do that,” Hardin told the council, noting that he can’t get the financing for the additional $800,000 for the project. “I don’t want to be part of a problem. I want to be part of a solution, be part of the community, but I’ve got to have something that works.”

Hardin added that he would not be able to offer office or storage space on a second story because the site lacks parking to accommodate it.

The new proposed building height at one story is about 28 feet; Hardin noted that elements of the revised preliminary plan, such as a tall roof and cupola, serve the aesthetic appeal of the Form Based Code.

Here is a look at the revised plan:

And here is a look at the former, two-story plan: 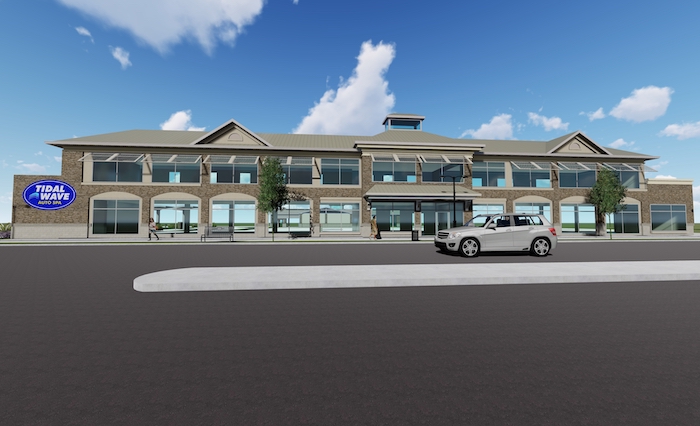 Planning Commissioner Frank Bruce said the Form Based Code is intended to be guidelines for development as opposed to strict rules.

Hardin noted that if the council approved the revised plan, he would begin steps necessary to set up demolition of the building on site — a major eyesore and cause for concern for many of the councilmembers.

“It’s really disturbing to me because it’s in my city,” said Councilmember Debbie Kring. “It’s really disappointing because we want to welcome business. We want to encourage you to use your creativity. I support your business and I want you to succeed… but leaving it like that for this period of time is extremely concerning to me.”

Hardin said he would consider selling the property if the council rejected the revised plans.

“I do not believe that this meets the goal of the city in terms of the comprehensive plan,” Davis said. “We had a deviation from the last review of this project, and this amendment certainly does not meet the two-story requirement for this area.”

Other councilmembers noted that the project would be an improvement and an investment in the property. Many of them noted that they may need to re-address the city’s Form Based Code if it turns away future development opportunities.

“I think if we were to hold strict to the Form Based Code, then we’re going to run into a lot of situations where we’re sacrificing good or great things for trying to strive for perfect things,” said Councilmember Nick Schlossmacher.

Hardin said demolition could begin as early as Aug. 5. The project would take roughly nine months to complete.