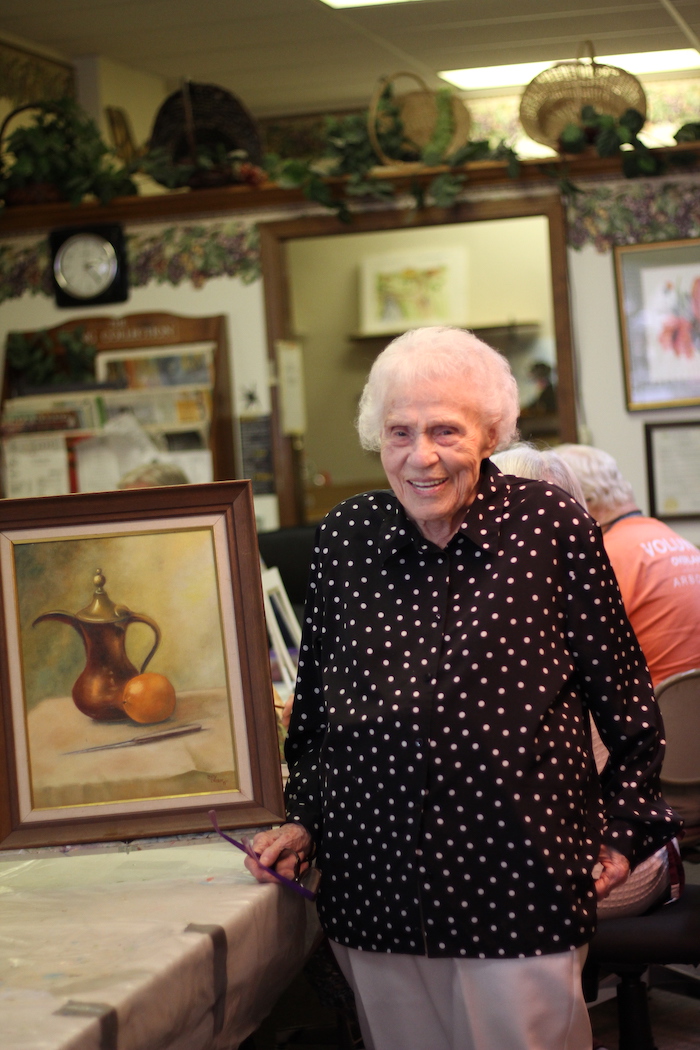 Betty L. Benson is turning 98 this month. Born July 24, 1921, and raised in Argentine, Kansas City, Kansas, she has lived in Mission since 1952 and owns some real estate along Johnson Drive. During World War II, she worked at the North American Aviation plant, and after the war, worked for General Motors. She maintained a lifelong career in personnel (human resources) before “retiring.” Now, she runs Mission Artists Workshoppe in downtown Mission. Benson was married to Bud Benson for 60 years before he died in 2006.

Usually if somebody falls, I have to laugh first and then seeing, are you hurt? Because it’s always so funny to me when people fall. It is terrible. I have to apologize for laughing. I laugh a lot.

My mother said I was born laughing.

Well, the one thing that I can really remember. Of course I love to go to art shows — you know, the good art — and my neighbor was a watercolor artist and so he came over on Sunday and he said, let’s go to the plaza, to the show. And so I was cleaning house and I hurried up and I took my clean pants on not realizing that my old stockings was under it. And I was hurrying and hurrying and I got cleaned up and ready.

We went down to the plaza and we’re walking and he says, what’s that hanging down your leg? And I looked down and it was one of those damn socks.

And so I sat on the side way, and I tried to pull them out, well they were on my leg too. And everybody in the crowd there was laughing and he was laughing. I had a lot of people watching and laughing, it was so funny. I was trying to pull them out of my pants and out of my legs. It probably was in the ‘60s sometime.

Well he’s gone now, but when he retired, it was ‘85 or something, I went to his party and I gave that story and it was funny.

Since I worked so many years in personnel, I had so many times when people confided in me. Not that I had a college (education), but I just learned to try to make people feel good and to know that it was good, and life was going to be OK if it’s not good today, but tomorrow, you know, it never stays the same.

And I think that just talking to people, because I would have people come up in personnel and they would be so upset about the job, you know, they were mad at the foreman and all that kind of stuff. And by the time that they would leave and you know, I would say just go ahead and do your job, don’t pay any attention to him, don’t let him bug you. That’s what they want to do.

I do worry about the country, but I do have a good feeling. I love people. They seem to like me too. I’m religious, very religious and I pray a lot. And if I can’t do anything about it, then I turn it to God and I just say, hey, fix it for me. And he does many times. I can’t go to church because I can’t drive, but I listen on Sunday, I’ve got five different half hours, they go right together. And one of them is the Amazing Facts and I love it because it explains the Bible and everything. ‘Cause I can’t read the Bible, I can’t read anymore.

I will say that sometimes I’ve talked about people too much, derogatory, and hated it afterwards. I’ve hated it and not knowing some of them are dead. I can’t correct it, you know. So be careful what you say about hurting people’s feelings.