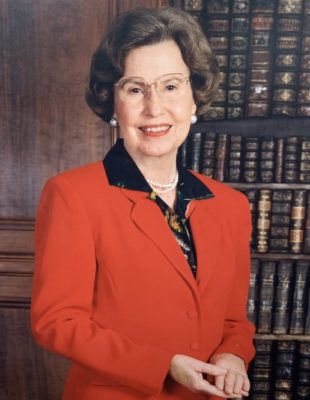 Janis L. Meyers (United States Congress, retired) died June 21, 2019, at AdventHealth Shawnee Mission Hospital. A memorial service will be held Saturday, Aug. 3rd at Asbury Methodist Church, 75th and Nall in Prairie Village, with visitation at 12:30 p.m. and service at 2:00 p.m. Memorial contributions may be made to Johnson County Community College or the Johnson County Library.

Jan was born in Lincoln, Nebraska, in 1928, to Howard and Lenore Crilly of Superior, Nebraska, and graduated from Superior High School. She was an honors graduate of both William Woods College in Fulton, Missouri, and the University of Nebraska. In 1953 she married the love of her life, Louis “Dutch” Meyers. The couple lived in Lincoln, Nebraska, where their daughter was born, and in Sioux City, Iowa, where their son was born, before moving to Overland Park in 1956.

At home with two small children, Jan embarked on a self-created five-point plan for self-improvement; one of the points was community activity, so she joined the Johnson County League of Women Voters. By 1968 she had served as President of the League and was active in the Johnson County Mental Health Association, the Johnson County Health-Welfare-Recreation Council, and the Citizens’ Committee For A Johnson County Community College.

Jan’s first political race was for the Kansas House of Representatives in 1966. She lost in a race that was decided, in a recount, by five votes. She then served on the Overland Park City Council from 1967 to 1972 (two years as council president), where her interests included park improvement and storm drainage improvement, and where she worked to avoid high-density development. She served on the Board of the National League of Cities, and was president of the League of Kansas Municipalities and chair of the Mid-America Regional Council.

In 1972 she was elected to the Kansas State Senate, where she sponsored bills to license home health agencies, increase penalties for drunk driving, and restrict the use of a rape victim’s sexual history in court. The June, 1982 issue of Kansas Nurse magazine, in an article entitled “Health Care’s Wonder Woman, Senator Jan Meyers,” called her “Unfailingly fair to all those who appear before her committee or serve on it, exquisitely diplomatic, able to understand complex issues in a flash and describe them simply and succinctly, a highly respected and skillful advocate in floor debate.”

She boldly ran for U.S. Senate in 1978, but was defeated in the primary by Nancy Landon Kassebaum. In 1984 she was elected to represent the Third District of Kansas in the U.S. House of Representatives. While there, after many interviews and intense study, she drafted a welfare reform bill. She was one of the driving forces behind the establishment of the Tallgrass Prairie National Preserve in Kansas. She was the first Republican woman in more than 40 years to chair a standing House Committee, the Small Business Committee. While she was a fiscal conservative, she advocated strongly for women’s rights throughout her career.

After retiring from Congress, she traveled with Dutch, went on field trips with Audubon of Kansas, and served on the boards of Johnson County Community College and the Johnson County Library. She was a devoted caretaker to Dutch during his final illness, until his death in 2009. Even late in life, she occasionally made appearances at political gatherings and at the college’s annual fund-raiser.

Jan is survived by her daughter, Valerie J. Meyers of Overland Park; son and daughter-in-law, Dr. Philip Meyers and Martha Ramirez, and granddaughter Maria Ramirez-Meyers, of Santa Fe, NM; brother and sister-in-law, Dr. Donn and Sylvia Crilly of Superior, NE; and her nephew and his wife, Ryan and Lesha Crilly of Lincoln, NE.

She could play the piano by ear, sounding out melody and chords of songs she liked. She loved watching birds in her back yard, reading murder mysteries, and traveling with family members. Her drive, her intelligence, and her devotion to family and her constituents through public service will be deeply missed