Lenexa has approved the tax increment financing project plan and redevelopment agreement for The Lofts at City Center.

The site for the development is located on an acre at the southeast corner of 87th Street Parkway and Renner Boulevard, in Lenexa City Center East Village. A final development plan approved in December shows the mixed-use, multifamily development will have a five-story apartment loft building with about 67 units and 10,000 square feet of office and structured and surface parking.

The tax increment generated from the project area will be used to reimburse the developer and Lenexa for TIF-eligible costs associated with the project, such as for site development, surface and structured parking and landscaping.

Chief Financial Officer Doug Robinson reported that the TIF increment generated from the project will be a conservative estimate of $3.8 million over the 20-year TIF term. The TIF increment plus other available funds are expected to be sufficient to pay for reimbursable expenses.

Here is a rendering of the development: 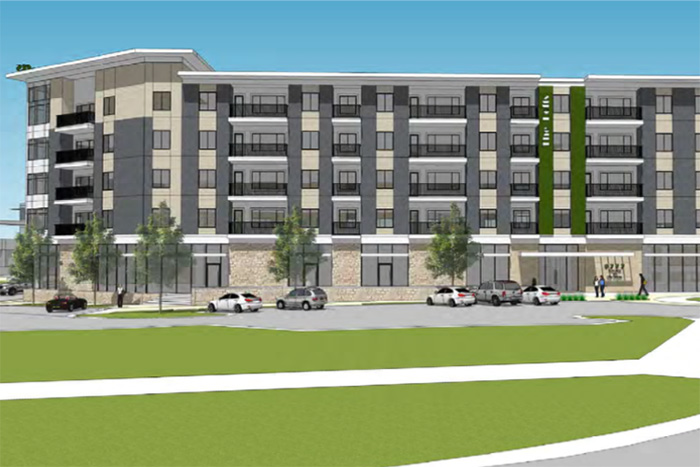 Sean McLaughlin, Lenexa legal staff, said approval of the plans is the final stage in the process for the developer to receive tax increment financing.

The Lenexa council on June 18 unanimously approved the TIF project plan and redevelopment agreement. There was no public comment.

The disposition and development agreement includes several stipulations such as civic involvement during the TIF term, being a member of the Lenexa Chamber of Commerce, and making an annual contribution of at least 0.5 percent of the annual distribution of TIF revenues to the Lenexa Foundation.