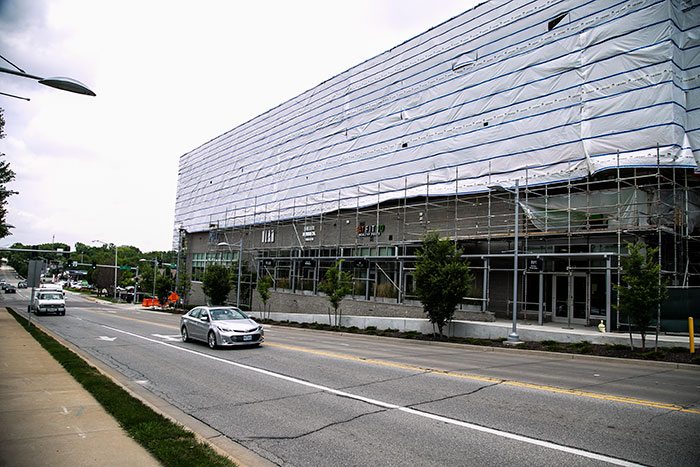 The past couple of years have presented Woodside Village developer Blair Tanner with a steady parade of headaches. But after months and months managing remediation work on the Westwood property, Tanner says there’s a light at the end of the tunnel — and that he’s now turning his attention to the next phase of the project.

It wasn’t long after the mixed-use building opened to tenants that leaking windows started to raise concerns. By the fall of 2017, the problem had gotten bad enough that the property owners determined they would have to undertake extensive corrective action to fix the water damage issues that arose in part from a contractor’s inadequate installation work.

“We realized that the problem was systematic,” Tanner said of the leakage. “So instead of trying to solve issues as they showed themselves, we just decided to solve the entire system by taking the exterior of the building off and then rebuilding it.”

(Tanner said he can’t give specifics on the circumstances that caused the water issues because his company is in active litigation to recover damages).

That remediation work presented a unique set of challenges, as the company worked to minimize disruption to both residential and commercial tenants. At times, residents had to move from one apartment unit to another while the exterior of their unit was wholly replaced.

“It was very stressful for us because we had to balance all the interests of everyone involved, both the residential and commercial tenants,” Tanner said.

Now, about a year and a half after remediation work began, the project is nearing its end. Tanner said work is about “95 percent done,” and that the final scaffolding that’s been visible to motorists driving by the property should be coming down in the next couple weeks. He says there has been strong interest in the residential units as they’ve been put back on the market. Seventy percent of the final 21 units that are having their exterior walls replaced have been pre-leased, Tanner says.

And with the announcement earlier this summer that Unforked had taken out a lease for the last commercial space on the ground floor, the building is nearly full occupancy. With the remediation phase nearly complete, Tanner said the company is returning focus to the next parts of the project.

“The next phase is already designed, so we’re ready to go,” he said. “We really wanted to resolve the issues here 100 percent before we focused too much energy on building out the next phases. So that’s where we’re at now. We’re starting to turn our attention back to those phases.”

Tanner said he couldn’t offer a tentative timeline for when second phase work might get underway. At present, the company is focused on lining up financing for the project and completing contracts.

“Until things are done, they’re not done,” he said.