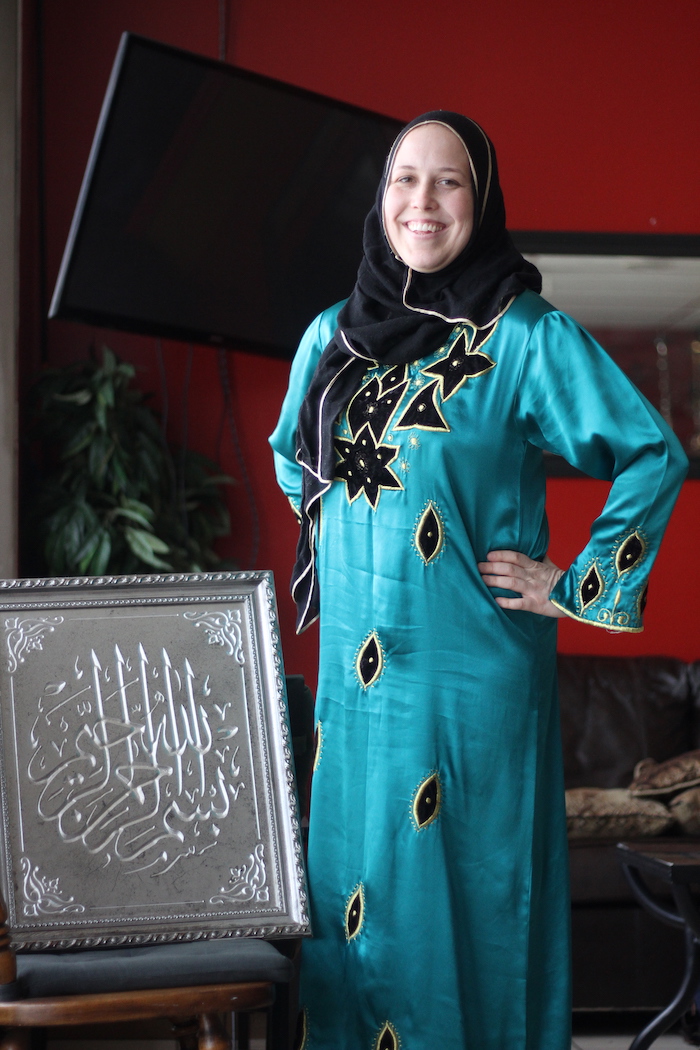 Born and raised in Johnson County to an upper middle class white family, Kaitlin Roberts had plenty of religious influences from family but couldn’t find her spiritual identity. After going to college and encountering Muslims, she converted from Presbyterian Christianity to Islam, then eventually met her future husband, Motaz Abdelrahman, a Palestinian-American immigrant. She took his last name and together, they own Zaman Cafe in Lenexa and live in Olathe with their three children. Two months ago, Abdelrahman started her first podcast, 3Point45, to tell stories of the 3.45 million Muslim Americans who live in the United States.

I remember being in Sunday school and asking all sorts of questions that nobody could really even answer. I could tell I was annoying, but I wasn’t trying to be a nuisance. I just really had questions and the answers were never the answers I was looking for.

Then I remember driving by the Village [Presbyterian] Church one time with my grandparents who are atheists and I said oh, that’s my other grandparents’ church, where do you guys go to church? They said, we don’t. I was probably 5. And I think at that point I realized that everybody believed something else and it was all OK.

I wanted to know what was the difference in these beliefs and why did people choose to believe a different thing, and that’s all I wanted to know at first. It was just literally knowledge seeking. I was very interested in religion in general belief systems, whether it was lack thereof or an actual religion, cults, it was always interesting to me, but I never had in my mind that I need to find my own belief system.

In college, when I was going to a Catholic university in Chicago, we had to take religion courses. And I was like, what religion do I not really know anything about? And Islam was one of them. I didn’t know any Muslims.

I found myself reading the Quran and studying Arabic because I wanted to go work in Dubai. So I found myself surrounded by Muslim people and I was like, what do you guys even believe? I had no preconceived notions about Muslims being terrorists. Although I was in 8th grade when 9/11 happened, my memory of 9/11 is that bad terrorists attacked the country. It wasn’t that Muslim terrorists attacked the country. That connection between “Islam” and “bad” was never made in my life.

I was never prejudiced against Muslim people, which allowed me to get to know them and ask them all of the questions. Like, why do you wear that thing on your head? Or what are you guys doing five times a day? Why are you putting your foot in the sink? I could ask them because I knew that I was coming from a place of genuine curiosity. I wasn’t trying to provoke them.

I became Muslim in 2008 and, by 2010, I thought I was ready to get married because of a health issue, which left me with really high chances of infertility. And I knew that I’d always wanted to be a mom, so getting married quickly became of greater importance.

When I met my husband, I disclosed all that to him and we talked about everything, and he knew he needed to be married to be able to live as a practicing Muslim in this country, because we don’t date and stuff like that. We got to know each other I think for six weeks before we were engaged. We’ve been married for seven years and have three kids now.

You can be a Muslim, whoever you are, wherever you are. And so the podcast, 3Point45, is about the 3.45 million American Muslims and how their stories are all vastly different. And also that they have more in common with the typical American than that person who may be afraid of Muslims would imagine.