Overland Park Police have identified the man shot and killed inside the Boost Mobile store in the 7600 block of Metcalf Monday night as Deshawn L. Brim of Raytown, Mo.

They say the investigation into the events leading up to the shooting is still ongoing. Crime scene investigators still had the parking lot outside the store entrance and the store itself blocked off as of Tuesday afternoon.

Early reports indicated that Brim had entered the store brandishing a gun and that he had demanded the store manager hand over cell phones. The manager refused and then drew his own weapon. At one point, according to the police account from a review of security camera footage, the two men had their guns pointed at each other. At that point the manager fired and struck Brim. He was pronounced dead at the scene.

The Missouri Department of Corrections shows that Brim was out of prison on parole and had faced previous charges of possession of a firearm and resisting arrest. The department’s website lists “distribution and/or delivery of manufactured controlled substances” as an “active offense” at the time of his death. 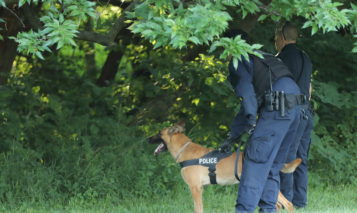