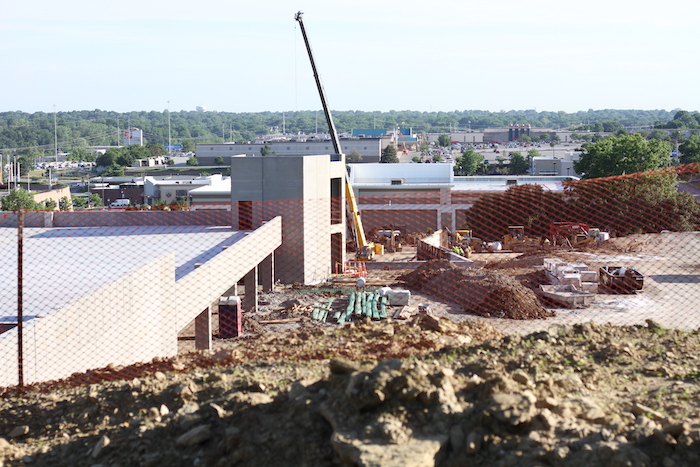 Construction on the new Merriam Community Center is more than halfway complete, and the building itself has gone vertical.

These milestones for the project at Vavra Park were part of Assistant City Administrator Meredith Hauck’s latest status update on the project. Hauck told councilmembers on Monday that, “hopefully” this time next year, the building will be open to the public.

“We have officially gone vertical on the building, which is really exciting,” Hauck said, citing work on the community center’s foundation. “We have made a lot of progress on the site over the last couple of months.”

City staff anticipate that McCarthy Construction, the general contractor for the project, expects the walls of the community center to be delivered to the site by July 16. Meeting that deadline keeps the project on schedule, Hauck said.

The walls of the natatorium are going up, and the parking structure is also substantially complete, with work wrapping up on the elevator, stair tower and electrical utilities. The latest video update of construction is posted on the city’s YouTube channel.

Next up: Utilities, road network, pools, furnishings and equipment

Over the next three months, site work and installation of utilities and the road network throughout the site will be a key focus, with the construction entrance moving to Ikea Way, away from the driveways of homes along Slater Street sometime by the end of this summer.

Work this summer will also begin on the indoor and outdoor pools, which require a deeper attention to coordination of details, Hauck added.

Construction crews hauled more than 12,000 gallons of water off site after the spring rains. Hauck said that, nonetheless, the rain has not delayed the project, which remains both on schedule and on its $36.6 million budget ($30 million for the community center and $6.6 million in tax increment financing funds to cover costs of the parking structure). McCarthy remains within its guaranteed maximum price of $32.5 million.

Other key focus areas over the coming months include development of tech work, audiovisual capabilities, building securities and fiber connections, as well as selection of furniture, fixtures and equipment.

The city’s public art committee has also selected Blessing Hancock to provide artwork for the community center. Hancock’s contract is being finalized.

Anna Slocum, parks and recreation director, confirmed that the art gallery in the community center will keep the name Tim Murphy Art Gallery, the same name as in the Irene B. French Community Center.

City leaders on Monday approved the creation and hiring of three new full-time positions for the community center.
The Merriam council voted 7-0 to approve the creation of a fitness coordinator, recreation coordinator and aquatics supervisor. Councilmember Al Frisby was absent.

Anna Slocum, parks and recreation director, said the positions will be “an integral part of developing the programming and the policies” for the new community center. City staff plan to fill the positions by late summer or early fall.

The aquatics supervisor will lead aquatics staff, while the fitness and recreation coordinators will be hourly positions and supervise a few part-time staff. Duties of existing positions have also been reshuffled, Slocum added.