After hearing concerns from neighboring residents about a proposed sports complex that would be next to St. James Academy, the developers has made some adjustments to their preliminary development plan.

Dan Foster with Schlagel and Associates, the lead developer for the Friends of Lenexa Sports Complex project, offered a preliminary development plan revised from the initial concepts approved by the Lenexa council in March. The changes mainly create more of a buffer between the complex and the neighboring subdivisions.

The sports complex would be located on the southwest corner of Prairie Star Parkway and Clare Road. Foster noted the fields and courts will mainly be used for practices and some games for St. James student athletes, but neighbors had opposed the project a few months ago out of concerns that the light and noise would be disruptive to their neighborhoods.

The developer noted the sports complex will mainly be used on weekdays for practices from 3 to 6 p.m. and for games on some Saturdays. Teams and leagues will also be able to lease the space when it’s not being used by St. James Academy, the primary user of the complex.

The developer has broken down the development of the site’s components into four phases:

Foster said some changes were made to the development to accommodate neighboring residents’ wishes. Increased buffers, berms, landscaping, trees and green space have been added to shield the neighboring subdivisions from the sports complex. The developer added these by moving the fire lane for the building to connect with the parking area on the northeast corner instead of placing it adjacent to West 95th Street on the south end next to residential area.

Foster said they also created a berm and buffer between the baseball fields and Prairie Star Parkway and are using modern LED lighting that will shed light only on the fields and not on the neighborhoods. A sound system with no louder than 55 decibels will also be used.

Here’s a site map of the preliminary plan: 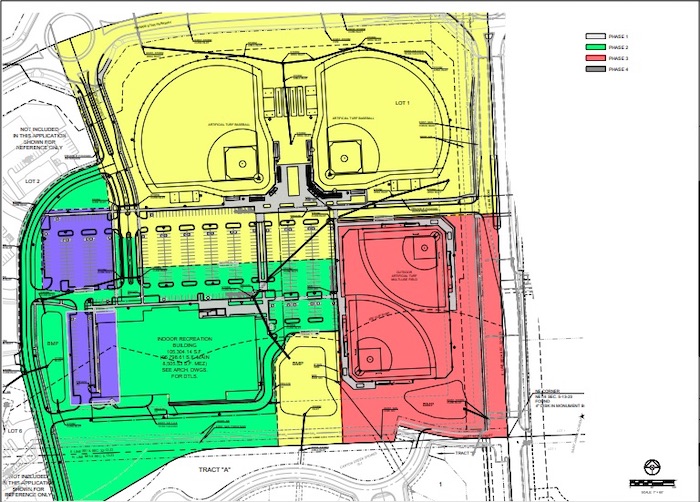 Planning commission members on Monday noted concern about field lights affecting the neighborhoods. They noted they would like to see a final plan for the field lighting before recommending approval on a final plan.

A setback of 400 feet is required between the complex and the neighborhoods, but some components of the site are anywhere between 65 and 310 feet from the surrounding roads and neighborhoods. City staff noted that Lenexa city leaders did not request changes to the site plan that would meet the 400 foot setback requirement, so no changes have been made in that arena. 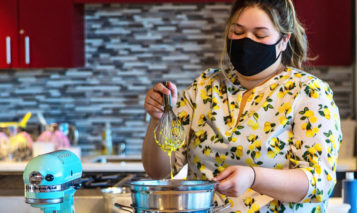