When the hospital could no longer keep her and suicidal thoughts still flooded her mind, Errienne Floden hit rock bottom.

She was in her early 30s, and already so much of the Blue Valley graduate’s life had become unbearable. Drugs, sexual and physical violence, manipulation and relationship abuse, financial distress, divorce — Floden had been through it all. She was about to be homeless that day almost two years ago when Kar Woo showed up.

Woo is a local businessman who established Artists Helping the Homeless. The local organization connects resources to vulnerable people who need a hand up. Someone had called Woo about Floden, and he came right away.

“I honestly think I would have been dead had he not… I had nowhere to go,” she said. “I was planning on killing myself when I got out.”

Woo is helping Floden and others like her to organize their life and find stability. Through Artists Helping the Homeless, she has a safe place to stay and, most importantly, a clean slate.

Or, in her case, a blank canvas. Floden paints and fiddles with various media as part of her own artistic endeavors; her work was on display last week at the organization’s annual art showcase. Here is some of her work: 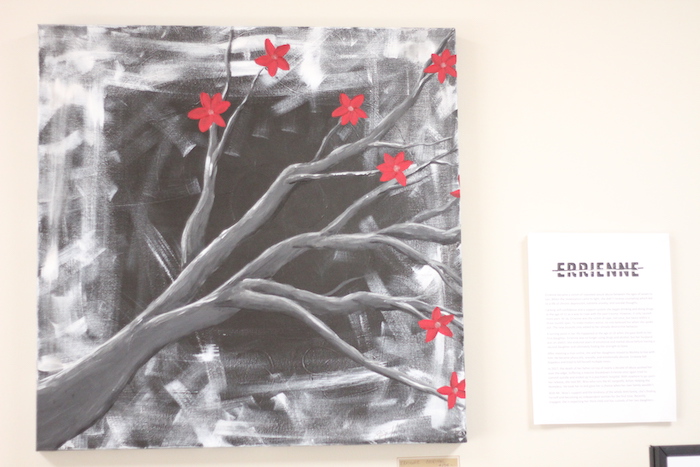 This year, Artists Helping the Homeless partnered with Mirror Inc., a new addiction treatment facility in Lenexa, to host the art showcase. Woo said 100 percent of funds raised at the showcase go to the artists to help them build self esteem and provide a bit of income.

“You look at somebody down the street who is homeless or whatever, substance abuse, but now you’re looking at him as an artist,” Woo said. “Sometimes in life, we need to slowly build our self esteem back.”

Floden was a child victim of molestation by a family member. She said she was nearly forced by a leader at her church to repent for the sexual abuse from age 6 to 11. When it stopped, she never got help or therapy. She was told to keep quiet. Someone exposed her to cigarettes, alcohol and marijuana. It went downhill from there.

Wreckless, abusive relationships. Sexual assault twice by the same guy who was several years older than her, then accusation from everyone that it was consensual and she had cheated on her boyfriend. Hardcore drugs — anything she could get her hands on.

Then, married at age 17 to a man who would verbally abuse her, she had to work two jobs and raise their two daughters while working on a college degree. She would later divorce but keep custody of their two daughters. After that, another man came into the picture, but he was manipulative, unfaithful and — she found out years later — sexually abusive to her daughters.

When she found out, it put her into such a shock that she collapsed into a mental breakdown. She had no hope, and she was hospitalized for her suicidal thoughts. After more than two weeks, the hospital had to release her. Her family rejected her, after all of the sexual trauma and her mental stress. That’s when Woo came into the picture.

Floden is finally getting closure now on the past few years of tumult. Woo has seen her overcome the many challenges she has faced. And she also has her children back in custody.

Floden said the man who abused her daughters is being charged for his crimes. Through Artists Helping the Homeless, she has also found steady work and continues to develop her artistic talent as a cathartic way to express herself.
Plus, she has met someone else who makes her happy. She is now engaged to Jordan Bosch, a man who is also part of Artists Helping the Homeless. They have a son together.