After receiving pushback from Lenexans on the proposed height of an eight-story hospital as part of AdventHealth’s site plan for a wellness complex in Lenexa City Center, the developers have agreed to lower the hospital’s height to five stories.

Lenexa residents and the city’s planning commission on Monday argued that the height of the hospital would tower over the homes to the north of AdventHealth’s proposed wellness campus on the northwest corner of West 87th Street Parkway and Renner Boulevard.

The nearest of the homes to the north of the site would be about 380 feet away from the hospital. Residents and most of the planning commissioners opposed the extra three stories on the hospital because of the view it imposed on homeowners in the neighboring subdivision Stonecreek of Parkhurst and the shadows it might create on or near homes in wintertime.

Dave Dalecky, Lenexa city planning staff member, said that although the city’s Planned City Center Zoning District guidelines limit building heights at 110 feet, the city could make exceptions when approving a development plan. The final height of an eight-story hospital would have been 151 feet.

After hearing feedback from several residents and most of the planning commission, Keith Copaken, principal of Copaken Brooks, a real estate company in Kansas City, Missouri, said they would adjust their proposal by limiting the hospital to five stories.

“Hopefully, it would remove the consternation that residents and, potentially the commission, would be going through,” Copaken said. “Hopefully, that allows commissioners to feel better about following staff’s recommendation for approval of the plan.”

Planning Commissioner Curt Katterhenry, who cast the dissenting vote, said he could not support the project with a hospital being located close to the north side of the campus. He was also concerned that approving a five-story hospital now doesn’t prevent the developer from returning in a few years to request adding three more stories.

Some residents were concerned with the increase in traffic (and accidents), especially during emergencies, at the roundabouts along Renner Boulevard. Lenexa resident Michael Drury, who lives near the proposed site, said he was also concerned the growing population density depresses his property values and increases traffic and crime rates.

“You’re talking about putting a 24/7, 365-day operation in the middle of a residential area,” Drury said. “It’s something we don’t need.”

Some neighbors were also concerned with the development of a helipad because of the noise of helicopters. Masilionis said that while the campus would have emergency services and a helipad to transport patients to trauma centers, the main focus would be to provide preventive and holistic care and encourage healthy lifestyles.

City staff noted the reduction of the hospital’s height does not affect site plans for the hospital to have 200 beds.

The site was already zoned to allow a medical campus, but previous plans submitted to the city from a different developer would have developed the portion of the site closest to the homes to the north into a surface parking lot. Magi Tilton, planning and development services administrator for the city, said a special use permit allowing a hospital on those pad sites of the City Center campus was first approved in 2008 and modified in 2016.

Here is another recent rendering of the site plan: 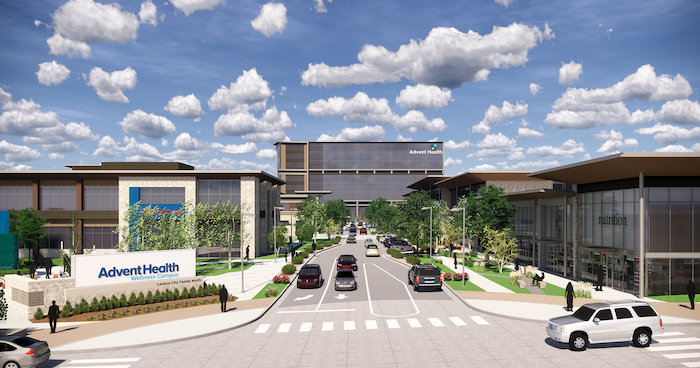 Copaken said the wellness campus is a multi-phased project on 25 acres that, if all components were to be built, would be developed over a 12-year period.

Once the project receives final approval from Lenexa, developers expect to first build the urgent care and imaging facilities within two years. The hospital is slated to be developed within three to five years and the emergency care building, the medical offices, retail shops and “lifestyle center” and skilled nursing facility would follow.

The Lenexa council will consider both items June 18. If approved, the developers will bring forward a final development plan to the planning commission at a later date.