In addition to its two restaurants already operating on site — Ignite Wood Fire Grill and Saints Pub + Patio, both of which are located along Renner Boulevard just south of West 87th Street Parkway — Riley Drive is developing The Yard, a $15 million development project on the City Center campus.

Scott Anderson, a principal with Riley Drive, which owns and operates more than a dozen restaurants and drinking establishments in the Kansas City, Des Moines and Omaha areas, said The Yard is the company’s next big project that is slated to begin this fall.

The Yard, a mixed-use development, will be located on 1.5 acres on the southeast corner of West 87th Street and Renner Boulevard — right next to The Lofts at City Center, a luxury apartment complex.

Anderson said that, once complete, The Yard will comprise of a five-story L-shaped building that accommodates the following components:

Anderson said they hope to have the site fully activated in spring 2021. Here’s another rendering of the development: 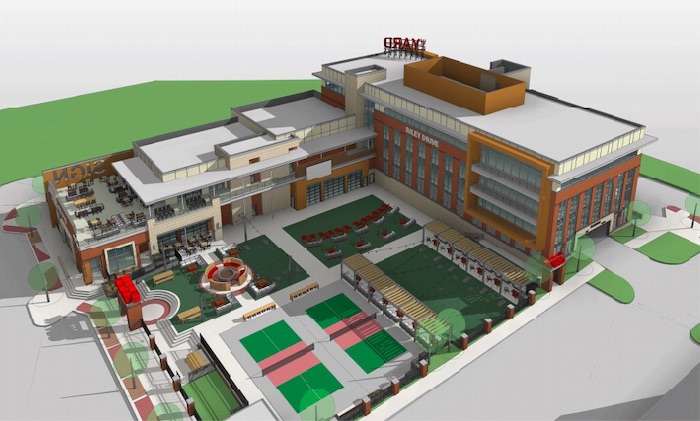 The Yard has passed preliminary approval from the city, and the Lenexa planning commission is scheduled this evening to consider the final development plan for the project, which includes additional office and parking levels, he added.

“We actually had more demand from tenants to lease space than we expected, so we went back to the city and requested approval to add a floor to the office building and also expand the parking garage under the entire Yard,” Anderson said. “I’m pretty optimistic that we’ll have a good result.”

In addition to the restaurant space at The Yard, Riley Drive expects to open two other restaurants:

The developers have requested the city allow partial tax increment financing and community improvement district funding for the project. He said the city has improved the public incentives, but how much they may receive in public financing has not been determined yet.

Anderson considers himself a “big proponent” of Lenexa City Center, since he houses his law firm office on site and has multiple development projects underway.

“I really think The Yard will act as a backyard for the city of Lenexa,” he said. “It’s going to be a place where families can gather on a Friday night. We can do some outdoor concerts.

“I think it’s going to be a great community gathering space. It’s something unique to the area, something I think people will really enjoy.”