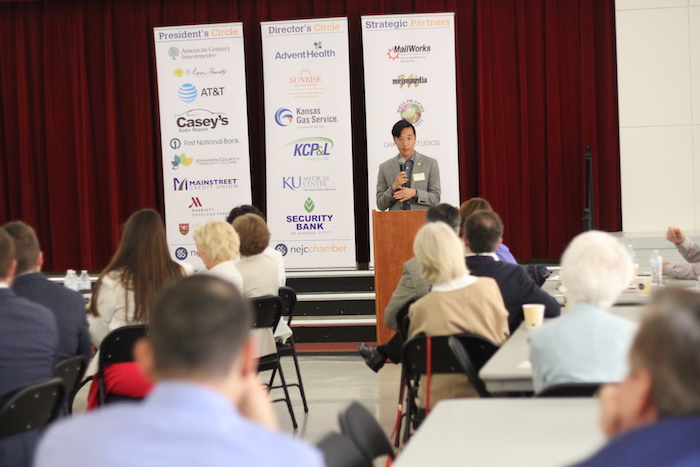 Local lawmakers shared their views on the main takeaways from this year’s legislative session, which wrapped last week.

Pettey said it has been a good but strange session during which “it took awhile for anything to happen.” She praised the statehouse for having more diversity among its lawmakers and a willingness to compromise and work across the aisle more.

Pettey praised the passage of a constitutional school funding formula, with about $90 million more each year for the next four years dedicated to public education.

She also said more funding is being dedicated to highway improvement projects, including a few in Johnson County.

Pettey expressed concern with issues within the state’s corrections department, such as costly outbreaks of Hepatitis C among inmates.

Pettey said that with the passage of Senate Bill 105, local elected officials can take office in early December, removing the “lame duck period” between terms. Senate Bill 128 also passed, which reduced the number of school safety drills from 16 to 9.

Pettey said she has also been selected by the National Council of State Legislators to be a part of an early childhood fellowship, which will allow her to learn more about early childhood development opportunities for Kansas.

Bollier said state lawmakers did not accomplish enough, as evidenced by her much shorter stack this year of conference committee reports.

“It was a very unusual, slow, very few bills actually moving through,” Bollier said. “You can say that’s good because bad things didn’t pass, but there were a lot of good things that didn’t pass either, so it was kind of a hard year.”

She was concerned that lawmakers failed to expand Medicaid this year, adding that she thought it was “ridiculous” that the Senate did not discuss Medicaid expansion this session. She was also disappointed that the state did not pass a nondiscrimination law to create legal protections for the LGBTQ community.

Bollier said the state passed a law that technically legalizes medical marijuana but creates a confusing process for enforcement — she voted against it.

As a freshman lawmaker, Xu said his first session was “slow but great.” For the first half of session, he thought democracy was truly at work, with lawmakers sitting in conference committees and improving bills.

However, he had concerns in the second half about the process of bundling several bills. He would rather have lawmakers vote on individual bills.

Xu said one of his committee goals was to improve the state’s pension system and improve salaries for security guards. As a member of the agriculture committee, he praised the state’s passage of legalizing industrial hemp.

Xu expressed concerns about the discussion of Medicaid expansion during next year’s session. He believes the Senate will pass “a much worse version” of it, although it could cover up to 138 percent of poverty.

Ousley called this legislative session “a pretty lame year” that was frustrating at times.

He said it was unfortunate that the Farm Bureau bill passed, because he doesn’t think it will expand insurance coverage for mental and behavioral health. He was disappointed the Senate didn’t vote on Medicaid expansion.

Ousley praised the state’s passage of the Family First Safety Prevention Act for child welfare, which he believes will help keep families together and help stop the state’s foster care system from being overpopulated.

However, Ousley was concerned that the state didn’t create an interim committee for oversight of the foster care system.

Clayton said that establishing a tax plan in 2017 has helped to stabilize funding issues for state departments. However, while she believes it has moved the state in the right direction, she thinks it hasn’t been able to move the state forward to “a balanced and solvent government.”

“There is no other way to determine the values of your elected officials than by what they will put their money behind,” Clayton said, adding that insight into the state’s budget allows constituents to see what their representatives are willing to fund and who they’re willing to tax.

Clayton said the state did not “make any real movement” to reducing the food tax. She thinks it’s important for the state to look practically at how local governments are funded and “not pull the rug out” from city governments.

She said the state’s revenue from sales tax is also coming in under estimate. Clayton urges lawmakers to run government in a solvent way.

Stogsdill said lawmakers need to improve the image of Kansas. Believing that increased funding for the arts is one way to do so, he proposed appropriations that increases the state’s budget for the arts in the commerce department from $150,000 each year to $500,000.

He called it a small victory for the arts. One example of way that the arts have improved society is the development of the InterUrban ArtHouse in downtown Overland Park. He thinks supporting the arts in Kansas can create a ripple effect of economic improvements.

Stogsdill said he was disappointed when his amendment to a gun bill didn’t pass; it would have outlawed clips that extend below the grip of a handgun. The shooting at Highlands Elementary earlier this year spurred Stogsdill’s decision to file the amendment, he said.