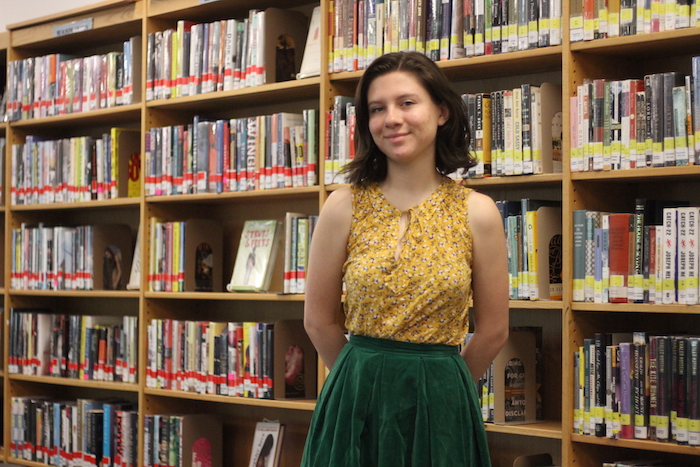 From a very young age, it was apparent that Natalie Nitsch had ample gifts.

The graduating senior from Shawnee Mission East was a fast learner, so slacking off was sometimes a temptation. But her parents pushed her to reach her potential, to try new things and to pour her heart into things that matter to her.

For the lifelong Prairie Village resident, many things matter to her: Family, music, writing and classical languages, and especially helping others, to name a few.

That desire to help others runs in the family; last year, she co-led a mentorship program for Indian Hills students that was first an idea by her father, Rich Nitsch, the school’s wrestling coach and a former FBI agent. When her father died suddenly before the program could begin, she decided to carry it forward.

“I don’t think you ever fully recover from losing a parent at age 17, but I like to think that I’m dealing with it pretty well,” she said. “My mom is awesome (and) my dad, he was all about the power of hard work.”

Nitsch said her father wasn’t very strong in academics, but he believed in the power of hard work, a lesson that she carries with her today.

“His whole thing was it doesn’t matter who you are, it’s what you do with it. That really impacted me in high school,” she said. “It would have been really easy for me to take easy classes and do well in them because I wouldn’t have to work hard. But that’s it, the value of hard work.”

And excel she did. With the support of both of her parents, Nitsch took advanced prep courses and was involved in several extracurriculars during high school. She was also an active student in Latin, which she studied all four years at SM East.

“It’s obviously a smaller, more obscure field, and a lot of people deride it,” she said. “Maybe it’s naive, but I think classics needs me because I care about it a lot and can make an impact. If I could do nothing but translate Latin for the rest of my life, I would be happy because after a while, you get into the rhythm of it. It’s like doing a puzzle.”

Needless to say, when the school administration decided to cut Latin from SM East’s curriculum due to low enrollment, she was devastated for her underclassmen.

“I’m very bitter about it; here at East it’s clearly not valued, hence the administration’s decision to cut our fantastic Latin program,” she said. “We have an award-winning program; we regularly beat out larger schools with larger Latin programs… in academic competitions. We did everything we could to stop it and it still happened, which is a good life lesson or something, I don’t know. Silver linings and all that.”

Nitsch said her whole thing at SM East has been to be very involved all of the time. She played the flute in marching band and hopes to continue playing while at university. She was her school band’s drum major, what she called a “formative” experience that taught her leadership and how to be vulnerable in front of crowds. She was also most recently co-editor of The Freelancer, her school’s art and literature magazine, to which she contributed all four years of high school.

“I’m able to convince myself that I love what I’m doing, even if I don’t,” she said. “I think that’s a very valuable skill of mine.”

Over the summer, she plans to relax, play a lot of music and do a bit of gardening. And in just a few short months, she will be attending the University of Chicago to further her studies in classics. Eventually, she hopes to work in research or become a professor in classical studies.

“He was not very happy with my decision to study classics, although I’m sure he was deep down,” she said. “I think he would have been happy to know that I’m following my passion.”