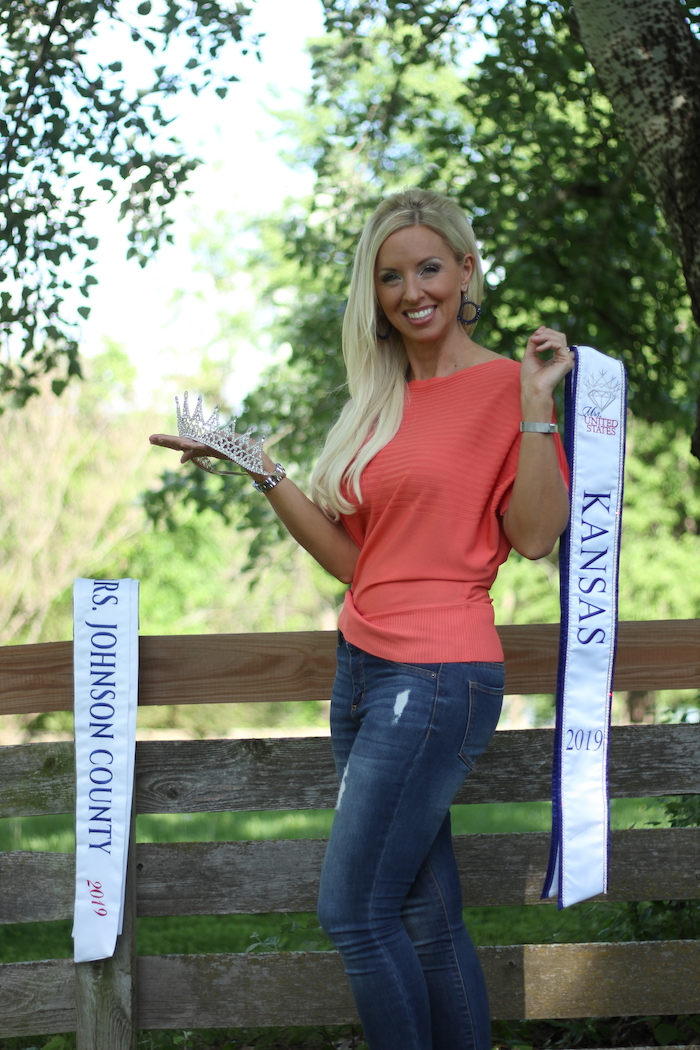 Becoming the next Mrs. Kansas was never about the pageant. Rather, says Randi Cole, the whole thing has been about raising awareness for a local charity, The Hearing Aid Project. Last year, she became Mrs. Johnson County and, in March, became Mrs. Kansas, a win that has helped her bolster both her charity and her platform, S.M.I.L.E. She Makes It LOOK Easy, an organization dedicated to bridging the gap between biological mothers and step-mothers who are raising children affected by divorce. She will compete in August for Mrs. United States. Originally from Percival, Iowa, Cole has been a Johnson County resident for the past nine years. She lives in De Soto with her husband, Trent Cole, their two daughters, Reece and Avery, their dog, Marlo, and their 18-pound cat Rudolph, who thinks he’s a dog.

Three years ago, I went deaf in my left ear.

I had a cold, just like a lot of people get a nasty cold virus and sneezing, coughing, all that good stuff, and my ear, I couldn’t hear and figured it was just a cold. I’d take the over-the-counter stuff, did that for a while. All of the cold symptoms went away, but the hearing didn’t come back.

So, doctor put me on a Z-Pack and did all that stuff and still no hearing. So then I went to the audiologist and then another big long name I can’t even say, after the audiologist. Injections through the eardrum of steroids and all kinds of things. It’s actually a known condition. It’s called SSHL, and that stands for sudden sensorineural hearing loss.

I found a community on Facebook of, gosh, I don’t even know how many members, but it’s the same story, and people do the exact same thing. They think, oh, it’s just a cold. And by the time you actually get the injections of the steroids that you need, it’s too late. So the moral of the story is the minute you lose your hearing, you go to the ER because the quicker they can get those steroids in, the more chance you have of retaining some hearing.

I’ve lived three years with nothing on this side except it’s replaced with tinnitus, the ringing.

Anyhow, I hooked up with, it’s called The Hearing Aid Project, and it’s through the Hearing Charities of America. In a nutshell, for every $500 they raise, they can take an old hearing aid, refurbish it, and give it to somebody less fortunate. They also take in older hearing aids as well, those donations.

If you’ve for any reason ever priced a hearing aid, it’s like the cost of a small car, and insurance, they don’t even scratch it. In only four states is it mandatory for insurance coverage for hearing loss. Kansas is not one of those states. I don’t know the statistics, but there are so many people that are just suffering in silence because they can’t afford hearing aids.

I’m starting to lose some of my right hearing as well. The good ear tries to overcompensate for the one that’s gone, so it’s working twice as hard. So everything is super magnified in that ear, so really noisy concerts or parties where there’s background noise, it basically sounds like Charlie Brown’s teacher talking to me, like I can’t distinguish sounds. So I am taking classes for American Sign Language at the Kansas School for the Deaf in Olathe, and trying to get prepared for when the inevitable happens.

Last summer, I turned 43 and I made a bet with myself. The year before, one of my best childhood friends beat stage four colon cancer, and she did it with such grace and never complained — at least not to any of us — that I thought if she can do that with being so fearless, there shouldn’t be anything stopping me. So I kind of made a deal with myself to give it a shot and see what happens and stop being so scared.

A lot of this was about fear for me and trying to get over some of my self-doubt and inner fears and pushing myself a little harder than I’m used to. I think I got a little too comfortable and needed to try something different.