Merriam’s 34th annual Turkey Creek Festival is tomorrow, and there’s a ton of activities for adults and children to enjoy, rain or shine.

Anna Slocum, Merriam parks and recreation director, said the festival is so much a part of the city’s identity because it builds community.

“People look forward to this because it’s been going on for 34 years, so it’s an annual tradition,” she said. “You now have generations that grew up coming that are now bringing their children back to the event to participate, so it does become a family tradition. 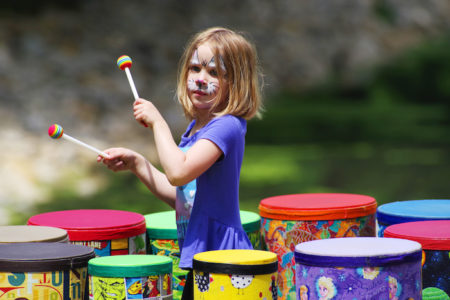 Slocum, who has been a part of the festival traditions for the past six years, said the Turkey Creek Festival retains much of its same traditions year after year, although city staff and volunteers frequently come up with new attractions. Several years ago, the festival was a chamber-led event that took place in downtown Merriam; now, it is a city-led event in conjunction with the Johnson County Park & Recreation District and, because it has grown in popularity, it now takes place in Antioch Park.

“I think the thing that I am most proud (of) is that our staff does a great job in holding the tradition of the festival by inserting things that are new and inventive,” she said, citing plans to draw on the popularity of Star Wars by bringing in Roving Star Wars characters. “Although we do have the tried and true events, we are always looking to improve those tried and true events and add things and grow the event every year.” 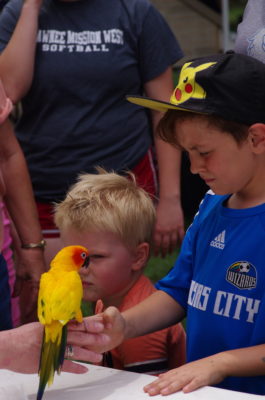 Some of the attractions this year include a drum safari, a parakeet adventure (introduced just last year), the Star Wars characters and an oversized Candyland game. A complete list of activities is on the city of Merriam’s website.

The day starts with a pancake breakfast and 5K and includes a variety of food trucks and local artists and makers. Plus festival-goers can enjoy three free concerts throughout the day featuring music artists Micah Burdick, Middle Theory and The ROAMies. But Slocum said the big draw for many festival-goers is free admission for almost all of the youth activities (the exception being the $5 pedal boat rides).

“That is a draw in this day and age where you rarely can go someplace where you can get in for free and the activities are also free,” Slocum said.

Festival parking is available at the Lee Apparel parking lot, 9001 W. 67th St., with shuttles running every 10 minutes to the park.

Rainy, stormy weather is on tomorrow’s forecast, but as of Friday morning it appear that the majority of the rain will come in the afternoon. As of now, the festival will go on as planned, but it could start late or end early depending on how severe the weather gets. The festival is a rain or shine event and will not be postponed to a later date. Merriam staff encourage festival-goers to check the weather line at 913-322-5591 for detailed event information if the severe weather arrives sooner than forecasted.