The organizers behind a public art project that would add a series of vibrant murals and mosaic benches throughout Downtown Overland Park got a key approval from the city’s planning commission on Monday, sending the plan to the city council next week for final approval.

On a 10-1 vote, the commission recommended granting a deviation from city code to allow the art to be installed. That recommendation will be taken up by the city council at its meeting Monday.

A map included in the materials for Monday’s planning commission meeting shows the locations for the murals as well as the mosaic benches: 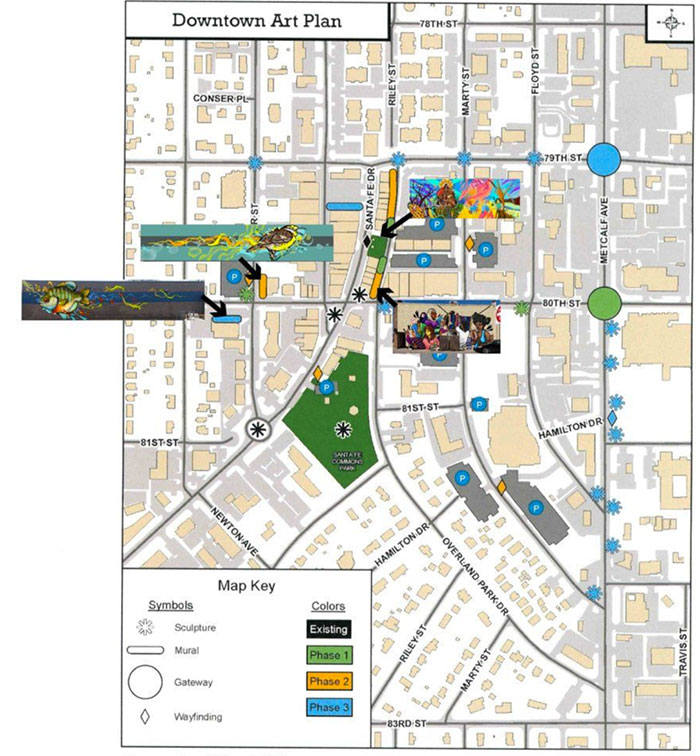 At Monday’s meeting, several residents spoke on the mural designs, with some criticizing their aesthetics and saying they weren’t cohesive with the style of downtown. Several others, however, spoke in support of the murals, saying they would add visual interest to otherwise bland walls and that they would represent the growing diversity in the area.

Michael Flanagan was the lone commissioner to vote against recommending granting the deviation, citing concerns that the mural planned for a wall on the Ten Thousand Villages building was essentially an advertisement for the business.

Nicole Emanuel, the founder of the InterUrban Art House in Downtown Overland Park, has been working on the idea for the public art installations for more than four years. The mural installations will be paid for with more than $30,000 Emanuel and her group have raised in funds for the project. The group has received a $15,000 grant from the Kansas Department of Commerce’s Creative Arts Industries Commission to help get the project moving forward.