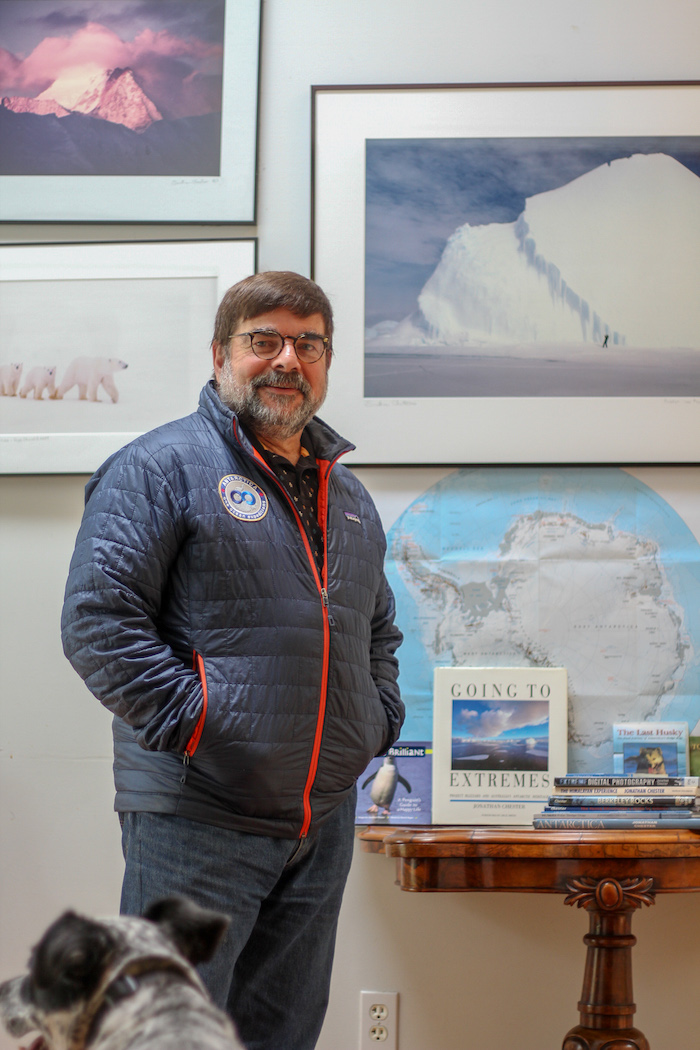 Maybe it’s because Antarctica is so close to Australia, or because he just loves learning about ice, snow, penguins and cold weather. Whatever the reason, Jonathan Chester has lost count of his expeditions to the frozen continent. Born in Adelaide, South Australia, Chester has befriended people from around the world during his many adventures, and he’s published about 20 books on Antarctica, penguins and extremely cold climates. A polar historian, author and photojournalist, Chester is now a travel guide for One Ocean Expeditions on adventure cruise ships in the Arctic and Antarctic oceans. He met his future wife, Kirsty Melville, when she edited his first published book, “Going to Extremes: Project Blizzard and Australia’s Antarctic Heritage.” She now runs the publishing division for Andrews McMeel. They have twin children and live in Mission Hills.

Douglas Mawson came from my hometown, so that’s why I was sort of particularly interested. His expedition is an incredible story, and so I sort of was entranced by that. And that basically fired my imagination to want to go to Antarctica.

Sometimes it’s hard for people to understand what’s going on because they just see ice, ice and more ice. But the sea is where the life is around Antarctica; you don’t find very much life at all inland. You find it more around the coast.

When I sailed to an island called Heard Island in middle of the South Indian Ocean, there I saw a penguin called the king penguin, and when I went to Mawson’s hut, I saw Adélie penguins. And so I got more and more into penguins and wanted to learn more about them. I ended up doing a whole lot of publishing with penguins from kids books.

Antarctica is really important to the world’s weather system and the world’s climate, and it’s changing very rapidly, especially in what we call west Antarctica. The irony is that sometimes it’s colder in Kansas City than where I am in Antarctica on the peninsula.

So my overall life’s work has been about sharing the incredible importance and beauty of this part of the world with people through my books and photography. And that’s why I enjoy going on expedition cruises and guiding, because there’s nothing like seeing these places and then being taught or having explained the different facets of it photographically and scenically. It’s like nowhere else in the world.

I’m not a scientist. I’m a guide and a photographer and a writer. But I read a lot of scientific work and work with a lot of scientists and everything that I understand leads me to believe that we are at — or maybe past — the tipping point with regard to the challenge of global warming.

This country, especially and the whole of the world’s population needs to address the issue. And we can’t just do it by changing the light bulbs. We have to change governments. It doesn’t matter what we do now and going forward — we’re so late to address this problem that there’s a lag in the effects of the increased amount of carbon dioxide and the increase in temperature.

This is something that wasn’t really clearly known 10 or 15 years ago, but now we have much better information, and every scientist that I talked to is very concerned about the state of the Antarctic glaciers in west Antarctica particularly. So I take their advice.

It is going to affect not just our children’s and their children’s lives dramatically. It’s already affecting our lives and it’s only going to get more and more pronounced, the wild swings in weather. We get to pay the price for not addressing this situation for a long time to come.

It’s a far bigger problem than anything else the world has faced, and America is doing its utmost to make it worse at the moment, at one level. It’s just unconscionable how the government of the United States today has ignored the compelling and overwhelming scientific evidence of the need to address this problem.

But there are other hopeful signs. The market forces are working very well to make fossil fuels less viable, despite our current president’s attempts to keep coal as a viable source of energy.