Gun violence was not at the heart of the panel discussion convened Thursday by Village Presbyterian Church about gun violence.

Relationships between parents and children, between teachers and students, between law enforcement and people at risk of completing suicide, and between proponents of common sense laws on guns and the growing number of Americans hoping for change or dreading the next shooting. 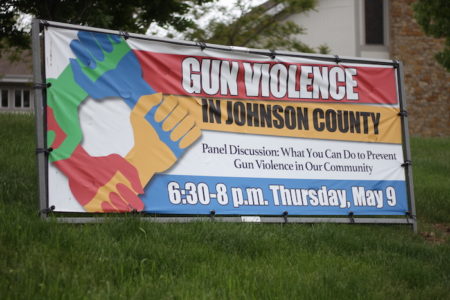 Panelists at the event at Village on Antioch talked about practical solutions that some groups are working toward as well as opportunities for individuals to make a positive difference in their homes, schools and communities.

The bottom line: Fostering positive relationships and creating a culture of compassion and understanding is at the root of the work that needs to be done to save lives. But each of the panelists shared a unique perspective on prevention.

Rev. Tom Are Jr., as a Presbyterian pastor, seeks to learn more facts and impart knowledge from a theological, historical perspective on the nature of freedom. He demonstrated that America’s freedoms come with individual responsibility to care for one another in our community. Rev. Are’s takeaway:

“Our faith calls us to see those on the bottom, those who suffer, the least of these, as family. They’re not more important because they suffer; but we must pay attention to them because the ones who suffer in our communities make it clear where the community as a whole is broken. Our faith calls us to privilege those broken by gun violence as we address efforts regarding this issue.”

Judy Sherry, president of Grandparents Against Gun Violence, is not against guns, but only against gun violence. Her organization started after the Sandy Hook shooting in 2012 to promote gun safety and the importance of being a responsible gun owner. Sherry’s takeway:

Jo Ella Hoye, an active volunteer of grassroots organization Moms Demand Action for Gun Sense in America, takes a legislative approach to the issue of gun violence. A proponent of common sense legislation for gun ownership — and a gun owner herself — Hoye said the topic hit home this week when an old friend from college and her child were in the middle of a school shooting in Douglas County, Colorado (they are safe). Hoye’s takeaway:

Dan Carney, director of safety and security for the Blue Valley School District, sees the growing role of police presence and school resource officers in schools as an opportunity to connect and engage with students, and not frighten them or create a hostile environment at school — one filled with metal detectors and armed guards. He strives for a school culture where students can find a trusted adult, which he has seen prevent crisis and even suicide. Carney’s takeaway:

“We reached the conclusion that metal detectors will make our schools less safe — and that surprises some people. I think the key to stopping school violence in its tracks is building the trusted adult relationships between all of the adults in the building and the kids in the building. What better way to stifle that relationship than to set up an ‘us versus them’ culture in a school.”

Bonnie Swade, founder of Suicide Awareness Survivor Support MO and KS, lost her son to suicide 16 years ago, not to gun violence. Nevertheless, she works to help others experiencing the pain of suicide, and to reduce stigma around suicide in order to directly address issues of mental health. Swade’s takeaway:

“I think the talk is out there: Parents need to talk with their children and grandchildren because it shouldn’t be a hush-hush topic the way it was when I was brought up. It was like if you talked about it, you’re going to put the idea in someone’s head. That’s not really true. We need to be aware, we need to be proactive on helping them, and we need to be somewhat sensitive to what they’re going through.”