A virtual reality gaming lounge has opened in Overland Park — and customers get discounts for completing real-life quests that help their communities.

The gaming lounge at 9341 W. 87th St. opened in January. Matt Cummins and Chandler Hines, co-owners of Odin’s Gaming Lounge, said their goals for the gaming lounge and questing board are to combine the gaming world with community involvement.

“I’m getting tired of seeing how quickly our world is declining,” Cummins said. “People are losing their moral values — I keep saying ‘decent human beings’ — because you’re seeing less and less of that. People staying in their houses versus going out and just experiencing new things.”

As gamers themselves, they also hope to break down stigmas that gamers are lazy. What better way to prove otherwise than by helping others?

Customers who complete quests get 15 percent off playtime in one of the lounge’s three gaming areas. The questing board at the lounge offers five types of quests:

“We always say that we want Odin’s to be a platform for others to succeed,” Hines said, gesturing to artwork and handmade items currently displayed around the lounge.

Odin’s Gaming Lounge collaborates with a local Facebook group called The Shieldwall, which also gets people involved in their communities. The Shieldwall now functions as the lounge’s free clan membership program.

Customers can perform quests to join one of The Shieldwall’s four clans, which compete for quest points. Each clan works to develop character in various ways, such as artistic talent, yoga, women’s empowerment, self-betterment and well-being, and helpfulness. Odin’s Gaming Lounge and The Shieldwall also started a podcast called Odin’s Alliance.

The gaming lounge is constantly adding quests and has already partnered with Habitat for Humanity on call to aid quests, as well as Baer Swords School of Western Martial Arts on community exploration quests. Cummins and Hines are also looking to partner with other nonprofits and businesses.

Because each partnership and quest results in a discount, Odin’s Gaming Lounge essentially loses money when customers don’t pay full price for playtime. That doesn’t matter to them.

“We’ve been asked before, how does this help our business succeed,” Hines said. “It doesn’t. It hurts us but we’re just trying to help first, not worry about the dollar.”

“That throws off a lot of businesses,” Cummins added. “When you say that, they’re like, ‘they’re being shady somehow.’ Literally, no. We’re just getting people out there to do things.”

Hines and Cummins, who served together in the U.S. Army, are also working to create a space for veterans to gather over gaming. Their experiences as military police officers in Afghanistan also shapes their outlook on the world; hopefully, the gaming lounge can build bridges and break down those barriers.

“Seeing that side of the world kinda puts things in perspective with life and family and people in general,” Hines said. “I just don’t like how people treat each other. I just want to help people, honestly. It’s as simple as that.”

Odin’s Gaming Lounge is open 5 p.m. to midnight Tuesday through Saturday. The lounge hosts free jam nights on Fridays when musicians can perform at the lounge. 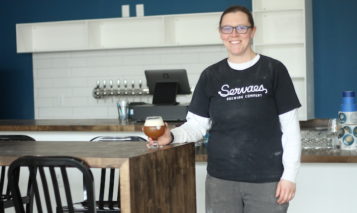