Fees for using the Scheels Soccer Complex in Overland Park will likely have to be increased to pay for upkeep on the artificial turf, city officials say. The question now is by how much more than the increases that are already scheduled for the next four years.

Council members on the Community Development Committee were told this week that the fee increase schedule set in 2013 is not keeping up with what it costs for artificial turf, which may need replacing as early as 2025. That plus other capital improvements at Scheels may leave the facility about $5 million short.

The soccer complex at Switzer Road and 135th Street is primarily used by Sporting Blue Valley Soccer Club and is headquarters of the Heartland Soccer Association, but can also be rented out by other groups.

Fees not producing enough to keep up with costs 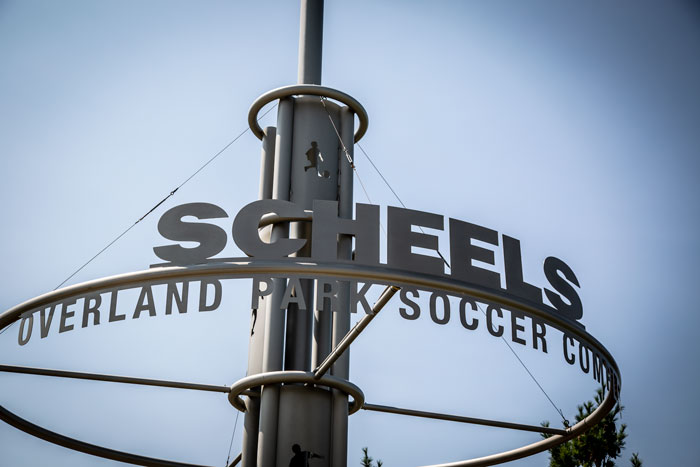 Five years ago, Overland Park set a fee schedule for the fields that increases by $2 to $4 every two years. The money is placed into a fund for upkeep of the fields. But city projections show that nest egg will only amount to $2.3 million while turf replacement is expected to cost around $5 million.

Moreover, comparable fields in other places charge substantially more. The Wyandotte County Athletic Fields in Kansas City, Ks. Swope Soccer Village in Kansas City and Olathe Soccer Complex charge more than twice as much as the $50 for an hour on a full field at Scheels, for example.

So council members told staff to begin to work up some numbers that would cover at least part of the expected shortfall.

City staffers have not yet worked out what increases might be reasonable, but Council members Gina Burke and Chairman Curt Skoog both said they’d like to see if it would be possible to raise fees enough to cover the entire shortfall.

“I definitely agree it’s important to have the amenity but we are paying debt on the bonds,” Burke said.

Raising the fees substantially might be tricky, though, because the original fee increase schedule was worked out with the cooperation of the Blue Valley club in mind, said Councilmember David White, who helped put the original fee scale together.

The fee increase schedule goes through 2022, with the next raise happening in 2020. Any decision about changing that should be agreeable to Blue Valley, which rents about 80 percent of the fields, White said.

Having one major customer at the complex also saves the city money and staff time because payments come in one check rather than collections from assorted clubs, he said. Blue Valley also provides workers to help run the fields while they’re in use. If that ended, the city would probably need more staff there during games, he added.

One hundred percent cost recovery might be too much for players and teams, he said. “If you do a huge increase you’re going to have some major sticker shock,” White said.

“Just understand if you do that you may be killing the golden goose.”

Councilmember Rick Collins agreed that increases need to be incremental. He and other pointed out that the big soccer tournaments bring people into the area and have an economic impact for the city.