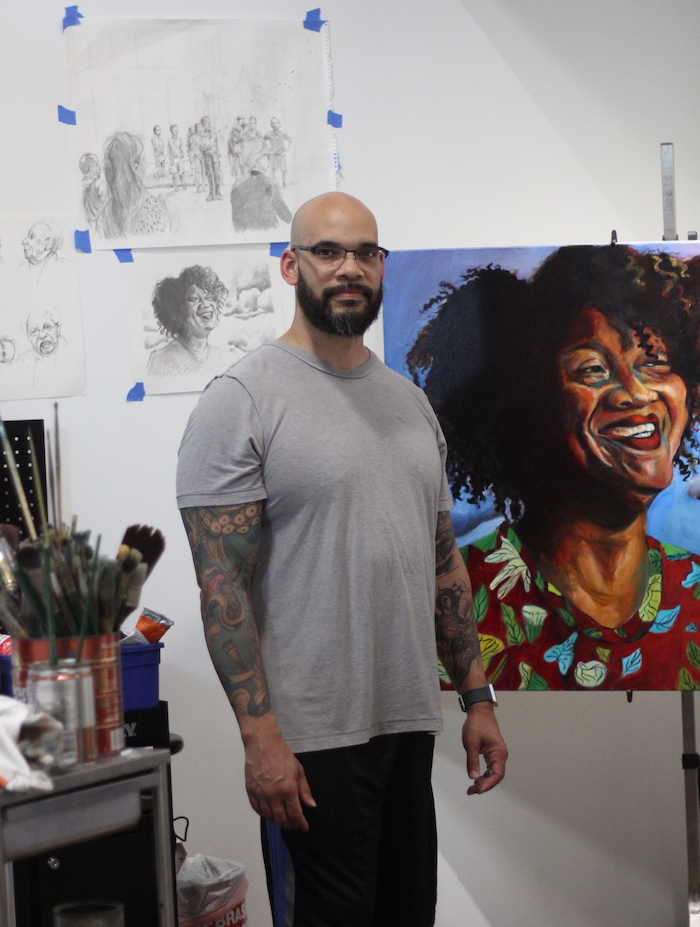 Oil painter Kwanza Humphrey sees the beauty and complexity of humans. The intricacy of his subjects inspires him to create representational portraits, often from just a glance or a brief sketch he makes in the moment. A graduate of Lincoln Preparatory Academy, he earned a bachelor’s degree in commercial art and design from Missouri Western State University in St. Joseph and is now a user experience designer at Cerner. He paints out of his studio in the InterUrban ArtHouse in downtown Overland Park. Humprey’s artwork is on display there and will be on display at The Farmhouse in the River Market in Kansas City, Missouri. He lives in Shawnee with his wife, Beth Sarver, and their two sons.

I try to get past what everybody sees and really get to the essence of people. You do that by observing and watching and adding and knowing or imagining.

Sometimes I just see someone and I’ll take a quick snapshot. Lately, I’ve had an opportunity to have people come in and sit for me, and so that’s been good. I’m trying to just get that naturalness. I don’t really want to pose anything. I know it when I see it. I’ve sat in the airport and drawn people. So it’s really just honing my power of observation.

A lot of people are very stoic in life. They have their own things that they’re trying to get done or move or go from place to place. And I like to capture people without that mask that you wear all the time.

Sometimes it’s just like a quick look, but that quick look is all I need; I can expand on that and push that. That quick look, in motion or whatever, is just that — a quick look. But with a painting, it’s a still. You’re there, so you can just revel in that for that moment and then really build a story.

I think we all have an opportunity to connect with each other. So I try and share that with everyone else and then through the people that I paint.

I like to connect with people, even though I don’t really like talking to them all the time. But I think there’s so many different things that make up who we are and that really can come out in your expression and your mannerisms. And I feel like there’s always going to be something new, even with the same person: the feeling, an emotion or where you’re at in life.

We’ll always be something different. You’re never the same as you were yesterday. So I just find that really fascinating, interesting. And I think it’s challenging. I like to challenge myself to really capture the essence of who we are.

It’s really to show that we all are special — and not — at the same time, and that we’re all connected on this planet. And I think by seeing the humanity in each other, we have a better chance of moving forward in a more, say, harmonious (way) and listening to each other rather than some of the divisions that we have.

I think people don’t take the time to just stop and look and listen. Hopefully, through the work that I share and create, it will inspire somebody to maybe approach someone they didn’t know or just listen to someone that they don’t know.