Overland Park police say an adult female died after being hit by a vehicle just before 12:30 a.m. Thursday.

In a release, police say a vehicle was traveling northbound on U.S. 69 Highway north of 103rd Street when the driver lost control and struck the median barrier. 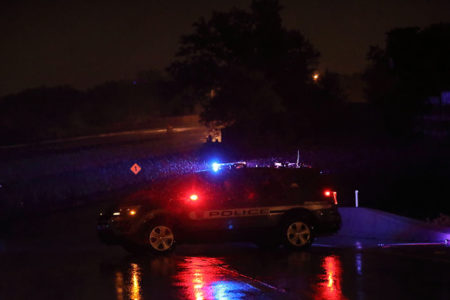 “A passenger in that vehicle exited the car and was struck by a second vehicle also traveling northbound on U.S. 69 Highway,” the release says.

The crash threw the female pedestrian over the median barrier and into the southbound lanes of the highway.

Johnson County Med-Act and the Overland Park Fire Department responded to both sides of the highway. The female was transported to Overland Park Regional Medical Center Center in critical condition. Overland Park Police say the woman later succumbed to her injuries at the hospital.

Captain Brian Houlahan says the woman’s name is not being released until next of kin can be notified.

All lanes of southbound side and three left lanes on the northbound side U.S. 69 Highway were closed after the crash and reopened about 3:15 a.m.

The department’s traffic safety unit continues to investigate. Anyone who may have witnessed the crash is being asked to contact Overland Park Police at 913-895-6413.