A Shawnee police officer conducting a business check called for emergency assistance Thursday afternoon when someone fired a gun during an argument in an apartment complex. 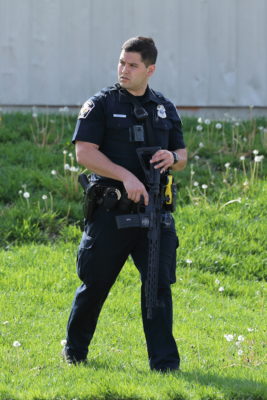 In a news release, Capt. Jim Baker says the officer heard a single gunshot while conducting a business check in the area of the Prairie Point Apartments in the 13900 block of West 63rd Street.   Up until recently, this apartment complex was called the Cottonwood Park Apartments.

Witnesses in the complex say they saw two dogs fighting earlier and they believe one of the dogs was the intended target of the gunfire.   Police confirm there was one dog injured by another dog. The injured dog’s owner took the animal for medical evaluation according to the police.

“There were no shots fired by the officer and there is currently no one in custody,” Capt. Baker said in a statement.

A three-officer team could be seen with rifles drawn, approaching one apartment door with a ballistic shield leading the way. The officers went to one door and then backed away from it after there was no response from inside.   No suspect information has been released. Police continue to investigate.