The ribbon cutting ceremony hosted by the NEJC Chamber marked the completion of a project that’s been years in the making. A 2015 analysis of calls for service to the fire department found that a location near 79th Street and Mission Road would ideally situate fire crews to be able to respond to the bulk of calls more quickly. With the aging station at 90th and Roe no longer able to accommodate the department’s equipment and operations, the fire board began looking at sites near the Prairie Village Municipal Campus as a potential location for a new station.

But initial plans to purchase .86 acres of land on the campus from the city of Prairie Village fell through after designers determined there just wasn’t enough space to fit a fully functioning station on the land. In 2016, though, the fire district’s board reached an agreement with Mission Road Bible Church, directly adjacent to the city land, to purchase a portion of their property for the new station.

Prairie Village Eric Mikkelson on Wednesday lauded the fire district for finding a way to make the location work and for designing a station that fit in with the aesthetics of the city campus.

“We’ve always partnered well with the fire district on safety issues, and this is just an extension and continuation of that,” he said. “And the design, as you can see for yourself, is beautiful.”

Finding a way to make the location near the center of the call volume map was key to the district’s goal of reducing the time it takes to respond to calls, said CFD2 Chief Tony Lopez.

“It puts us right in the middle of the highest service area, so we can respond to calls in each direction,” Lopez said.

A dedicated driveway from the station to Mission Road is blocked by an electronic gate. When fire crews leave the station, they have the ability to trigger the existing stop lights at 77th Street and 79th Street to ensure the engines have clear access to turn onto Mission Road. Under an agreement with the city, the engines will not turn on their sirens until the vehicle is traveling along Mission Road.

The new station houses two fully staffed crews for a ladder truck and an engine. The district retains ownership of the facility at 90th and Roe, but does not currently station any fire crews there. Johnson County Med-Act continues to run service out of that facility, though.

Lopez said the district will continue to monitor call volume in the area in the coming years to see if the development at Meadowbrook could warrant the establishment of another small station on the southern edge of the service area.

The fire district was able to absorb the costs of the new station without seeking a property tax rate increase. 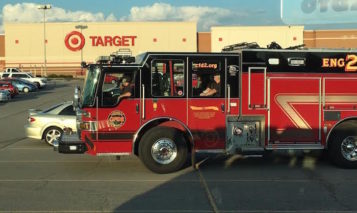