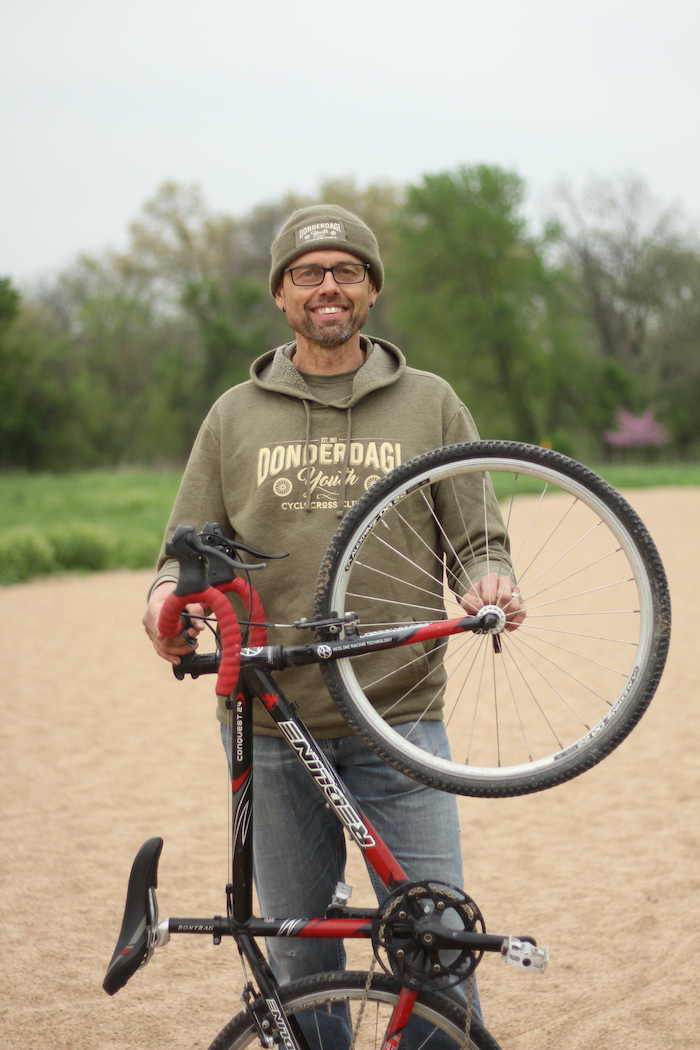 A self-employed carpenter and handyman for most of his working life, Donald Jonas Jr. is making some major life changes this year. He grew up in Kansas City, Kansas, and ran his own business, Jonas Brothers Inc. Nearly a decade ago, he founded Donderdag Youth Cyclocross Clinics in Shawnee, a free cyclocross training program for children. He lives in north Overland Park with his wife, Christina Jonas.

I knew the minute my second kid moved out of the house that I didn’t want to stay in our house anymore because it’s just too big. It’s just more house than I wanted to have to take care of and live with my wife.

So about three years ago when we realized we were getting the kids out of the house and they were doing well, we started talking about living in a tiny house. Last year, right before my birthday, and right before our anniversary, we went and bought an Avian vintage coach in St. Louis, Missouri.

We worked on it all through fall of last year up until it snowed and it was really kind of too cold to get much done. And then I just had this transforming experience over the winter time where, for whatever reason, I took most of December off, which I normally never do. I’ve never had time off cause I’ve never been out of work. I just kept getting these signals from the universe. I’d go out to sell a job with somebody and for whatever reason, I wasn’t selling jobs like I normally did.

And so I quit my job. I knew I had to quit before I was 60, because it’s just a physically demanding job. I wanted to quit when I was on my game.

I thought, you know what, for once in my life, I’m going to bank on the time and money that I’ve saved and the investment I’ve made in our home and I’m going to take a huge risk. And instead of working on this camper for a year and a half on the weekends, I’m going to just leave my job and risk it, put work on the camper full time until it’s done and hook up and go, sell the house. It’s the highest risk, craziest thing I’ve ever done because I’m a low-risk guy.

The next job is a collection of things that I’m already working on that my job will be to grow, just like I grew this job when I first started it.

The Donderdag course, I’ve run that for nine years. I’d like to see that grow. My goal is to invite children to experience the outdoors on a simple little machine that’s practically magic and to see just how amazing they can be in rain, snow, ice, cold, mud, sand, misery, blood, tears, all of that. Donderdag, to me, is my footprint in society, to invite kids to grow and to become what they want to be as big as they want to be it.

I’ve done quite a bit of public speaking now. I do public speaking at a personal enrichment community out in Olathe called Heart Connexion. And I’ve done some writing and I’ve gotten really high encouragement on my writing.

I’m in the biggest change of my life ever, other than getting married and having kids.