Lacey Lewis, a local realist figurative artist and art instructor, was beginning to outgrow her studio space in Kansas City, Kansas. So she picked up and moved her studio to the Colony Plaza in northern Overland Park and gave it a new name.

Lewis and her students celebrated the relocation of the Lacey Lewis School of Realist Art — now at 7800 Shawnee Mission Parkway, Suite 17 — with a grand opening April 13. 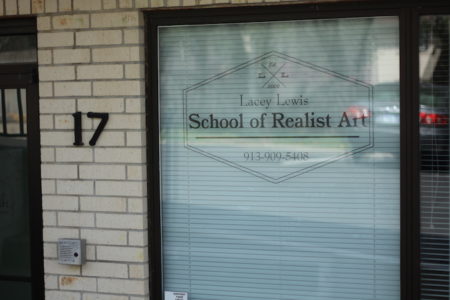 Formerly named Red Door Studios, Lewis’s art business has moved a few times in KCK. After a five-year search, she finally found the perfect space in the lower half of Colony Plaza. The studio features an array of her works as well as ample floor space, storage and shelving for her students’ tools and projects. Access to the studio is at the rear of the building.

Lewis said she enjoys the accessibility on Shawnee Mission Parkway; it’s not too far from downtown Kansas City, and it’s affordable and privately hidden in the back of the office complex, she added. 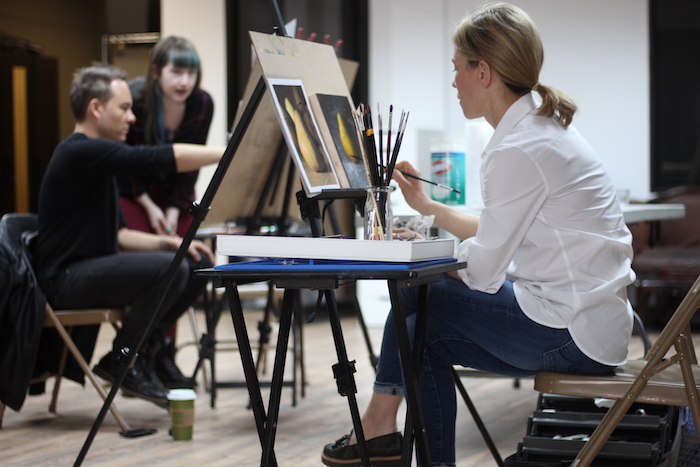 For more than 12 years, Lewis has been developing her teaching style into concrete steps that can be taught to anyone. She started with private lessons and gave a curriculum for each student. Now, she teaches regular classes on various components of realist art.

“I’m not the kind of teacher who’s just going to have you explore your materials or have you ‘feel’ what you’re trying to paint and then go for it,” she said. “I think it’s like math; everybody can learn math at least to some level. 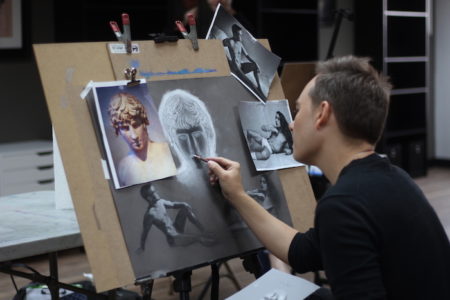 “We don’t usually see artwork that way. We see it as a kind of mystical thing that you’re born with and you just do it and you don’t know how. I’m the opposite of that. I can get anybody to make a realistic image.”

Lewis said her increasingly organized curriculum spurred the name change from “studio” to “school” to reflect the formality of her teaching style.

“I’m starting to have a pattern of a series of classes you could take to get an entire education from beginning drawing — that you’ve never picked up a pencil before in your life, you can’t draw a straight line,” she said. “You could start there and, class by class, progress through until you’re doing figurative painting from life.”

The bigger studio also allows space for Lewis to continue her own realist figurative art and portraitures. She used to paint only at her home in Kansas City, Kansas, where she lives with her husband, Samuel Swift Perez.

Lewis also hosts open figure sessions and art demonstrations, which anyone with any level of experience can join. She specializes in graphite, charcoal and oil, but also teaches watercolor and gouache as well as pen and ink.

“Art terms are weird and people get hung up on different art terms; even realist is something that people will argue if I’m a realist or not,” she said. “But as far as I’m concerned, I make images that are realistic; they look like the thing that they’re representing.”

Editor’s note: The story has been updated to note the correct city in which the new studio is located. The address is in Overland Park, not Mission.