Friends and family this week are mourning the loss of Frank Bardwell, whose outgoing demeanor and facile ability with names and faces made him a beloved fixture at the Corinth Square grocery store for nearly half a century. 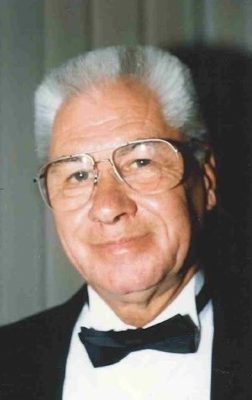 “He actually ran a commissary there on the base, so he really was in the grocery business his whole life,” said his daughter Mindy Bardwell Robertson.

After completing his service, he moved to the Kansas City area and began working at a grocery store at Red Bridge. He soon transferred to the store at the Village Shops, and then transferred again to the Corinth Square store, where he remained through his retirement in 2006.

He knew the names of hundreds and hundreds of customers, who were drawn to his friendly spirit. He was such a familiar, comfortable presence, Robertson said, that customers would often share personal details with him before they told close members of their families.

“I was always shocked that people would tell him some of the things they did. Women would tell him that they were having babies before they told their husbands,” she said.

In the mid-1990s, the Corinth Hen House honored him by holding a Frank Bardwell Day, which included specially printed tee-shirts with his face on them. Upon his retirement, then-Prairie Village Mayor Ron Shaffer presented him with a key to the city.

Bardwell earned the Master Grocer of the Year Award in the early 1990s.

Outside of work, Bardwell was a dedicated cyclist who used to claim that he had logged enough miles in the saddle to have gone around the world three times.

Bardwell is survived by his daughter Mindy, of Gardner, as well as her husband Bill and their three children; and his son David, of Creighton, Mo., as well as his wife Michelle and their son. He was preceded in death by his wife Joyce, to whom he was married for 46 years.

A visitation in Bardwell’s honor will be held 6 to 8 p.m. this Friday, April 26 at the McGilley & Hoge Johnson County Memorial Chapel, 8024 Santa Fe Drive, in downtown Overland Park.

The family suggests that memorial contributions in Bardwell’s honor be made to the American Heart Association, 3816 Paysphere Circle, Chicago, IL 60674.

“We want people to make donations to the heart association because my dad had the biggest heart in Prairie Village,” Robertson said. “He really did.”