This school year marks the 40th anniversary of the Shawnee Mission South band’s exchange program with a music school in Germany.

SM South band students greeted their German counterparts last night at the high school, two days before their joint concert. Every four years, the band students from SM South and Musikschule im Schloss in Bietigheim-Bissingen travel to each other’s school, play music together and learn more about each other’s culture.

“Anything that lasts 40 years is pretty amazing,” said Steve Adams, SM South band director, at yesterday’s meet-and-greet. “I’m just proud to pass this to my students. I’m excited because a very good friend of mine is here.”

Adams was speaking about Ralf Janssen, assistant principal of Musikschule Bietigheim-Bissingen; it is thanks to friendships like theirs that the program has lasted so long, he said.

“But then (it’s) also the friendships that are being made right now with these students,” Adams added. “Their kids are interested in the same things our kids are, and they’re about to find that out this evening.”

Adams has been leading the band exchange for 33 years; his counterpart, Janssen, has been at it for 30 years.

‘We have much more in common than we are different’ 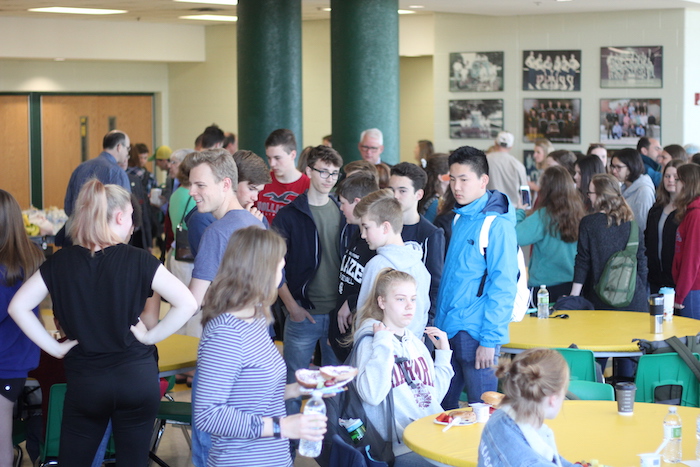 Sandra Kaltenbrunn, conductor of the Musikchule band, was herself an exchange student in 1999. She’s still in touch with her former host SM South family, Melissa and Steve Harmon and their son, David. The program hasn’t changed for 20 years, and Overland Park isn’t too different either, she said.

“The people didn’t change at all,” Kaltenbrunn said. “We have much more in common than we are different.”

Janssen said he’s especially proud that the exchange program resulted in Overland Park becoming a sister city with Bietigheim-Bissingen. The two cities celebrate their 20th anniversary of the sister city relationship this year.

“I think it’s a wonderful relationship, this culture exchange,” Janssen said. “That’s very important in this time now when politicians are doing not so well.”

Some SM South families, like the Horners, have been participating in the band exchange program for years. The Horners host German students during their stay in Overland Park.

“The kids will just expand their horizons and find out what they have in common with someone that lives over in Germany,” said Gina Horner, whose two children, Chase and Katie, are in the band as well.

This year, the Horners are hosting Jonas Mollenkopf, a sophomore German trumpet player. Coincidentally, Chase Horner plays the trumpet too.

“They’ve been texting, and Chase said he wants to find out what a bagel is,” Gina Horner said. “That part is just kind of cool, and that they speak the international language of music.”

Mollenkopf said he’s pretty excited for his first visit to America. His first impressions: “Everything is so huge.”

“Everything is bigger and taller than in Germany: like cars, like food, everything,” he said, citing America’s larger food and drink portions. “It’s true, it’s really true.” He also hopes to share some German words, lifestyle and culture with the Horners and compare with the American experience.

The German and SM South students are going sightseeing together around the Kansas City metro area, and will enjoy a bonfire and play the traditional soccer game between the two schools at the SM South stadium.

The 40th anniversary celebrations continue with the Sister City Concert at 7 p.m. Saturday in the gym at Indian Woods Middle, 9700 Woodson Drive, Overland Park. The concert will feature performances from both the SM South symphonic band and the Musikschule band.

The German and SM South band students will also perform at the Shawnee Mission South Area Band Festival at 7 p.m. Tuesday in the SM South gym.