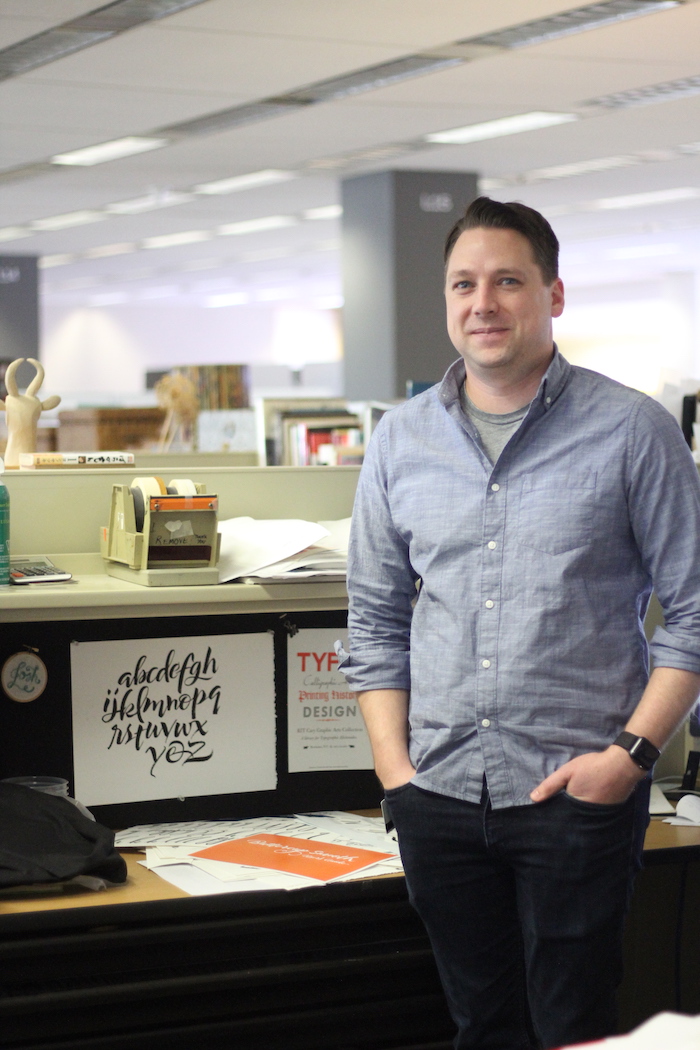 This one goes out to all you font lovers out there. Meet Josh Scruggs, the man behind the mystery of font making. For the past 14 years, he’s been creating fonts for Hallmark Cards. A senior font designer, his portfolio has grown to 194 of Hallmark’s 2,143 individual proprietary fonts. Of those, 112 are solo, original creations (the others were the result of collaborative projects). He earned a graphic design degree from the University of Kansas. Scruggs enjoys spending time with family and playing an occasional game of disc golf. He lives in Prairie Village with his wife, Michaela Scruggs, and their two daughters ages 9 and 7.

Type has the ability to connote tone and voices. I kinda like to think of it like that. A font that you would put on a sympathy card is not going to be the same font you would use on a humor card or a kid’s card, things like that. We think about the audience as we design, as designers use our fonts. They definitely want it to be appropriate for whatever the message is.

I had never really considered a career in type design, but as I was in school, I dabbled in designing my own fonts. At that time we used a piece of software called Fontographer. I used some of my fonts on some school projects and stuff, just sort of as a hobby.

As I look back and see how I ended up here, it sort of makes sense. I had always had an interest in letter forms and doing unique styles of lettering. I took it a little bit more seriously my senior year of college and did an independent study class where I could create my own project. For that I wanted to create a full typeface. It was never finished, never really released, but it was something that was in my portfolio.

I applied to Hallmark as a general graphic designer, just about right out of college. They saw that I had some type design experience in my portfolio and happened to have an opening in the font group. It wasn’t where I saw myself going, but then I was like, oh yeah, I could see myself doing this.

I think to be into type design, you have to not mind a certain amount of tedium. Type design projects can be a long process, probably about anywhere from three to six months. Some people spend years, but we try to work faster than that here. I listen to a lot of podcasts and music while I’m working, so it’s something you can kind of just zone out a little bit and kind of get into a flow working through all the glyphs and drawing.

It’s really cool once a font starts coming together. It’s sort of just an idea at the beginning, or it’s just a few sketches, and once you start filling it out and start to see it, to be able to type it in words and to be able to see it in a sentence and see the texture of it as it comes together, it can be pretty exciting to see it become a real thing.

And then once you see it used on actual cards and product, it’s really cool to see, and people use it in ways that you wouldn’t have expected. A font that I recently did was intended for kids product, kind of a humorous, whimsical style. But then I saw it used on a little bit more of a sophisticated card. So it’s just interesting to see how the fonts are eventually used.

We’re used to staring at a screen and black-and-white stark contrast as we’re developing the font, and then to see it printed in color, it’s exciting. I always say my favorite font is the one I’m currently working on because that’s what I’m always most excited about. It’s what’s coming up next.