Hy-Vee is planning to remodel its grocery store in Shawnee beginning this summer. With those changes, the grocery company is adding a Starbucks and Market Grill Express in-store at 13550 W. 63rd St.

The remodel will coincide with Hy-Vee staff’s spring theme “Change is Good,” as staff gear up for the new components. Construction is slated to begin in June and be completed in January 2020. Hy-Vee staff said the store will remain open during construction.

“We’re going to do our best to make the shopping experience the least stressful that it can be,” said Lisa Humble, human resources manager for the Shawnee grocery store. “I realize that it’s rough when there’s a remodel, but we’re going to work really hard to take care of our customers during construction.”

The additions of Starbucks and Market Grill Express are part of Hy-Vee’s plans to focus more on offering fresh products as opposed to pre-packaged goods, Humble said, citing the company’s effort to match trends in the grocery industry and meet customers’ requests.

The remodel includes both exterior and interior improvements to the Hy-Vee grocery store. Here’s a look at the exterior changes: 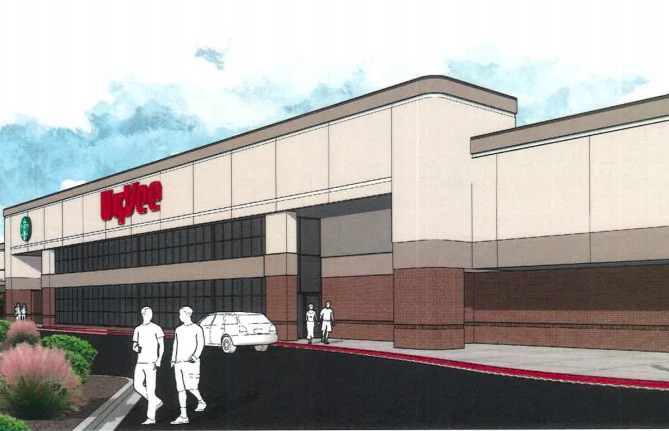 The Shawnee planning commission on Monday voted 8-0 to approve the changes. Commissioners John Montgomery, Bruce Bienhoff and Rusty Mudgett were absent. There was no discussion, as the item was on the commission’s consent agenda.

The store was built in 1995, and the building exterior features a neutral color palette with slate blue and red accents, city staff noted, adding that the proposed improvements include updating the colors to warmer neutrals and staining the existing brick red to match the nearby Hy-Vee gas and convenience store site at 13875 63rd St.